Whose side are you on? 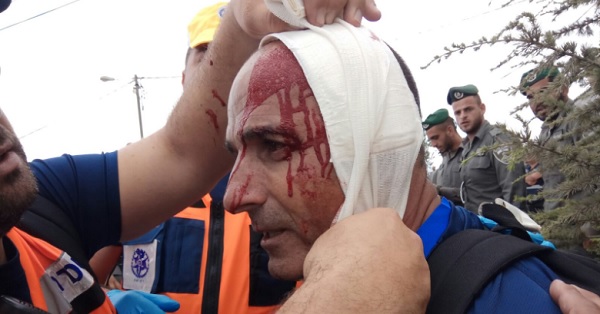 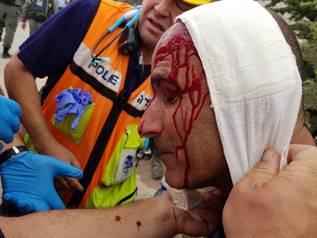 Take a look at this photo.

It shows an Israeli police officer suffering a head injury yesterday in the West Bank, just south of Bethlehem. Who attacked him? A Palestinian? Hamas? No. Rock-throwing Jewish settlers.

These hoodlums were part of a crowd of hundreds of right-wing zealots who gathered at Netiv Haavot, an illegal outpost, to protect buildings that settlers built on stolen land, privately owned by Palestinians.

Yesterday’s clashes went on for hours. Settlers gathered in the structures and on roofs, pelting police officers with rocks, bottles, and paint canisters.

The large police force – thousands of officers – came to this West Bank mountain ridge to enforce an Israeli Supreme Court demolition order, the result of a petition by Israel’s Peace Now movement and the Palestinian land owners. Over the course of several years, Peace Now and the owners persisted, filing seven petitions to the High Court of Justice. The settlers kept on building. The Israeli government dragged its feet to avoid enforcing the law.

Yesterday, finally, under an unequivocal court order, the fifteen illegal buildings were evacuated. They were demolished earlier today.

Considering the volume of illegal settlement construction in the West Bank, this is a modest victory for Peace Now. The settlers are determined to expand their West Bank footprint and Netanyahu’s government is committed to help them.

But Peace Now’s legal action reminded the Israeli public who the settlers are and, again, challenged Israelis to choose sides. Are they with the law-breaking zealots or are they on the side of peace-seeking pragmatists?

Peace Now needs your help to continue suing the law-breaking zealots and the extremist Netanyahu government that supports them.

Thank you for choosing our side. Please make your tax-deductible contribution to APN so we can continue to support Peace Now.

Settlements in Focus - Vol. 2, Issue 3: Amona Redux
Amona: Everything You Need to Know
Please read Ori's op-ed and give in his honor
APN's Ori Nir Oped in Washington Jewish Week: "Trump nods to the Israeli dissenting interpretation"
They wrote: "Death to the Police"
Peace Now Settlement Watch: Settlers Take Over Two Houses in Hebron
This Passover, jump into the fray