APN Outraged by “Merger” of US Embassy and Consulate in Jerusalem, Calls on US Jewish Leadership to Act 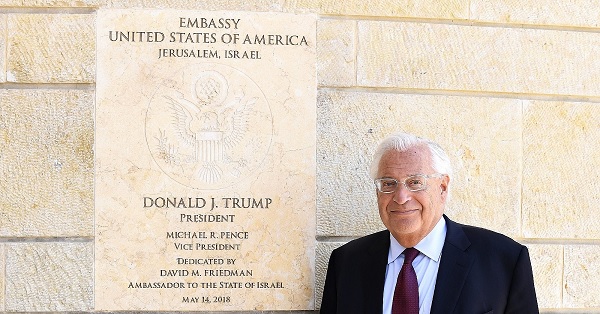 APN strongly condemns the Trump Administration’s decision to subsume diplomatic outreach to the Palestinians into the US embassy to Israel. We call upon fellow American Jewish organizations to join our demand that Secretary of State Mike Pompeo reverse this disastrous decision.

Turning the US consulate to Jerusalem, which until now has served as a de facto embassy to the Palestinians, into a “new Palestinian Affairs Unit inside US Embassy Jerusalem” (to use the language of today’s State Department press release) is a severe blow to efforts to achieve peace between Israelis and Palestinians.

Past US policy was based on the goal of achieving a two-state solution. Under the Trump administration, this is no longer the case. Even before the two-state solution became official US policy, all American administrations – both Republican and Democratic –since 1967 have maintained a firewall between what is sovereign Israel and the territories Israel occupied in the 1967 war. The manifestation of that approach was assigning the Jerusalem consulate to act as a liaison to the Palestinians, while keeping the mandate of the US embassy to Israel strictly within the Green Line.

Downgrading the US diplomatic mission to the Palestinians to a subsidiary of the US embassy to Israel signals that American policy toward the Israeli-Palestinian conflict has changed dramatically. It puts a giant question mark over the assumption of a future Palestinian state. It is yet another gesture in a series of humiliating measures toward the Palestinians and their leadership by the Trump administration.

More than anything, this measure signals an acceptance, if not outright embrace, of Israel’s accelerating process of annexing the West Bank, a declared goal of the most extreme right-wing elements in Israel’s governing coalition.

The fact that this “merger” (more accurately, a hostile takeover) will be led by US Ambassador to Israel David Friedman makes this development even more alarming. David Friedman has openly and publicly attacked the two-state solution. He is an avid supporter and past financier of Jewish settlements in the West Bank and has been openly contemptuous of the Palestinian leadership, availing himself of any opportunity to demean it. Disastrously, Friedman has emerged as the architect of the Trump administration’s calamitous policy toward the Israeli-Palestinian conflict and no one within the administration is willing or able to stop him from ramming through his agenda.

Coming after the Trump administration’s decision to close the PLO mission in Washington, this latest development further diminishes the potential for the US to play a constructive role in brokering a solution to the Israeli-Palestinian conflict.

As our sister-organization, the Israeli peace movement Shalom Achshav (Peace Now) has stated, “The price of Trump’s drawing from the hip and acting unilaterally will be paid by civilians on both sides.”

To American Jewish leaders: as a poll released yesterday further underscores, most American Jews oppose President Trump’s policies toward the Palestinians. Accordingly, we call on you to act as stewards of our community by calling on the Trump administration to reverse this decision and adhere to the longstanding US policy of promoting the two-state solution. US national security interests and the future of Israelis and Palestinians demand it.

7 Things You Should Know: Trump’s Decision on Jerusalem
APN's Debra Shushan and Ori Nir in Haaretz: U.S. Jewish Groups Say They Support a Two-state Solution. So Why Are They So Quiet While Trump Dismantles It?
NEW ITEM - Goal: Lower the expectations of the Palestinians - The Friedman File: APN Watch on soon-to-be-ex-US Ambassador to Israel
December 19, 2016 - US-Israel in the Trump era: Ambassador Friedman and a US embassy in Jerusalem
Legislative Round-Up: October 29, 2021
Ultimate Deal? APN Position Paper in Advance of the Trump Administration's Israeli-Palestinian Peace Plan
Hard Questions, Tough Answers (October 31, 2018) - On the margins of peace