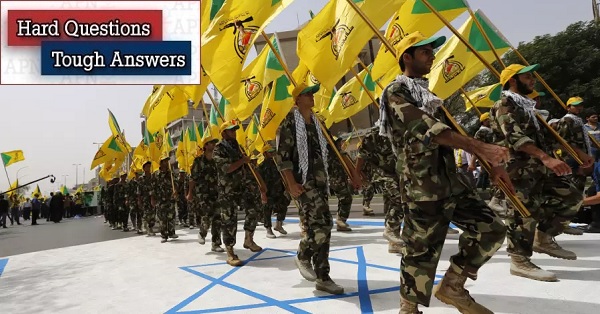 Q. US Special Representative for Iran Brian Hook stated last week, apropos Iranian arms proliferation throughout the Middle East: "We are one missile attack away from a regional conflict". Is this relevant to Israel?

A. Hook was pointing to a missile attack on Riyadh's international airport by Yemen's Houthis, an ally of Iran. But he mentioned Lebanon too, where Iranian weapons supplies to Hezbollah are growing in quantity, quality and especially range, and being delivered more directly.

Here we confront the possibility that Israel's active opposition to Iranian arms supplies to Syria and particularly Hezbollah will now focus on Lebanon rather than being confined strictly to Syrian territory. Apparently, Russian pressure on Iran has caused the latter to redirect some of its arms supplies to Hezbollah away from Syria, where Israel has attacked and intercepted them, and channel them directly by air to Lebanon. Lately, Iranian transport planes have been spotted at Beirut airport.

This has taken place in parallel to Russian pressure on Israel to desist from attacking those arms deliveries on Syrian soil. Israel has indeed reduced the frequency of those attacks though they still take place; one was openly advertised by the Syrians last week, including fallacious claims of downing an Israeli aircraft.

Would Israel attack Iranian arms and munitions plants on Lebanese soil as it has been doing on Syrian soil? If attacked by missiles fired from Lebanon, almost certainly. Would Israel preempt? Prime Minister Netanyahu has stated that Israel cannot tolerate a major Iranian upgrading of Hezbollah's missile and rocket capabilities. Hezbollah leader Hassan Nasrallah took this possibility seriously enough over the weekend to openly warn Israel that Hezbollah would respond with missile attacks on strategic targets like IDF Headquarters in Tel Aviv and the Dimona reactor.

Q. So Iran is now more directly involved in Lebanon. Obviously this could have an escalatory effect.

A. Yes, and so could a series of additional developments. One involves Syria and its Lebanese ally Hezbollah. With Bashar Assad resurgent and reclaiming control over more and more Syrian territory, the Syrian leader is also now trying for the first time since 2011 to play a hegemonic role in Lebanon. But now, unlike in the past, Russia and Iran are backing him in this effort. This is one key reason why Lebanese Caretaker Prime Minister Saad Hariri has failed to form a new governing coalition in Beirut after more than six months of internal political negotiations. He cannot in good faith accept Hezbollah's ever-growing demands for coalition influence. Yet in view of Syria's and Iran's influence, he cannot easily reject them.

Then too, a major effort by Israel to fortify its Lebanon border is nearing completion, with earthworks planned in border zones disputed by Hezbollah even as the Lebanese Shiite Islamist militia welcomes home more and more of its battle-hardened soldiers from Syria. Israel and Lebanon also disagree on their gas-rich maritime boundary.

Q. It's not as if all of Russia's and Iran's problems in Syria have been solved. . .

A. No, but they pale in comparison to what the Syria/Iran/Russia alliance had to deal with until this year. To be sure, Idlib in the Syrian northwest is still in Islamist rebel hands, parts of Syria's west are still contested by ISIS or occupied by a handful (now up to 4,000) of US troops and by the tens of thousands of Syrian Kurdish militia troops they support, and Turkey and the US are at odds over the status of Kurdish-occupied Syrian territories. But the Syria/Iran/Russia alliance controls the rest of the country and is systematically making inroads elsewhere.

The bottom line here is that what prior to 2011 used to be a constant dynamic of Syrian attempts to hold sway over events (and lives: Hariri's late father Rafiq) in Lebanon is now being renewed, but with a new and more dangerous twist: Iranian and Russian backing for Syria and possibly Hezbollah.

Q. Israelis hear Nasrallah's threats of massive missile attacks but don't seem to be moved by them.

A. Israelis are used to Arab and Islamist leaders--most recently Nasrallah but also the Gaza-based Hamas leadership--threatening Tel Aviv and the Israeli rear. Four and a half years ago, in the summer 2014 conflict, Hamas rockets did indeed target the Tel Aviv area; the Israeli public acted responsibly regarding civil defense demands and requirements. Nor have some of us forgotten Saddam Hussein's rockets in 1991, many of which were aimed at Israeli population centers.

The Israeli public, then, is not in denial and is able, in extremis, to deal with these threats. It nevertheless behooves us to note that the threat from Lebanon--by the boastful Nasrallah but with more Iranian and Syrian support then ever--is backed up by a far more powerful and accurate missile arsenal than anything Israel has confronted until now. The Israeli public is quietly but repeatedly being informed by its military and political leaders that another round against Hezbollah will mean far greater civilian losses than previously, in the 2006 Second Lebanon War.

This situation in turn poses, at one and the same time, three prospects. One, noted earlier, is preemption by Israel against Hezbollah missiles, based on the logic that this is the best way to reduce Israeli civilian losses in an inevitable war. Another is preemption by Hezbollah/Iran, aimed at maximizing damage to Israel and possibly drawing Syria and even Russia into the fray.

The third prospect is the status quo: mutual deterrence, albeit in an increasingly tense atmosphere that is fueled by growing Lebanese subservience to Hezbollah and Syria/Iran.

One way or another, a new war with Hezbollah, meaning almost certainly an IDF ground invasion aimed at physically eliminating Hezbollah's infrastructure and armament in southern and eastern Lebanon, not only begs the question whether the Israeli public is ready to absorb heavy losses. It also projects a second strategic dilemma regarding IDF war readiness.

The Israeli army's performance against Hezbollah in 2006 was good enough to ensure 12 years, and counting, of peace and quiet. But it was hardly a decisive victory. It is hard to decisively defeat a non-state Islamist enemy that is engaged in disproportional warfare and that never needs to concede defeat. It may well be even harder when the IDF, rather than training exclusively for this war, devotes 55 percent of its activities--mainly glorified police duties--to the Palestinian territories.

Yitzhak Rabin of the 1993 Oslo Accords and Ariel Sharon of the 2005 Gaza unilateral withdrawal understood the ramifications of this imbalance and sought to correct it by reducing Israel's military burden policing Palestinians. Netanyahu and his ultra-nationalist followers do not share this understanding or perception.

Perhaps the growing threat from Lebanon and via Lebanon is what Netanyahu was referring to when he warned the public recently that a murky military challenge justified avoiding early elections. But apparently he does not understand that getting himself reelected is not the answer to the threat. Of course, with indictments for corruption looming, both Netanyahu's Lebanon calculations and his election calculations could become badly muddled.


Q. Does this threat assessment regarding scenarios of war with Syria, Lebanon and Iran, with Russia hovering in the background, involve the US? Do we have cause for confidence in Washington's strategic grasp of the Middle East during the Trump era?

A. Yes, war to Israel's north will one way or another inevitably involve US interests in the region. But how? There is no basis for confidence in Trump's likely response. First, because of course like everything else Trump does internationally, that response is unpredictable. But let's go further. Following the passing of Bush 41, President George H. W. Bush, we can go out on a limb and assert that Israel has had cause to doubt American wisdom in war and revolutionary situations in the Middle East ever since Bush 41.

Bush 41 was the last US president to bring to office significant experience in strategic and foreign affairs. And it showed: in ending the Cold War and reuniting Europe, in prosecuting the First Gulf War with wisdom and reserve, and in convening and shepherding the Madrid peace process between Israel and the Arabs. Throughout, he backed another wise foreign policymaker, Secretary of State James Baker.

Bush 41's successors, from Clinton through Bush 43 and Obama on to Trump, have registered a few Middle East accomplishments and quite a few setbacks and disastrous decisions. One way or another, it has been all hit and miss, often displaying a conspicuous lack of deep understanding of either the region or the workings of global strategic affairs.

Bush 41 had his run-ins with Israelis, particularly PM Yitzhak Shamir. No need for retrospect here: even at the time, Bush was right in demanding that Israel not respond to Saddam's missiles. And he was right in telling Shamir that he could not have both expanded settlements and US-backed loan guarantees for absorbing the million Jewish immigrants whose arrival from the teetering Soviet Union was facilitated by Bush's policies.

Yes, Bush 41 banged on the podium and complained loudly and not very tactfully about the pro-Shamir Jewish lobby. But he had a point then, too.