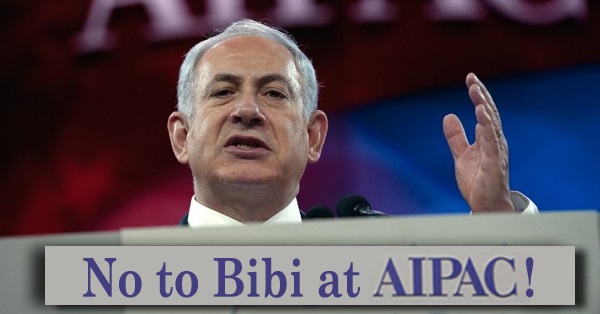 Speaking at AIPAC’s policy conference has in the past provided Prime Minister Netanyahu with what Israelis perceive as the seal of approval of pro-Israel Americans just before elections. Israeli elections are scheduled for April 9, two weeks after the AIPAC conference.

Netanyahu made common cause with Otzma Yehudit, a party led by followers of the racist ideology of Rabbi Meir Kahane. Netanyahu orchestrated a deal to ensure Otzma’s representation in the next Knesset. The party’s platform calls for “total war” against “Israel’s enemies” (read: Palestinians) and their expulsion from Israel, the West Bank, and Gaza.

After Bibi brokered the Otzma Yehudit deal, AIPAC called it a “racist and reprehensible” party. But the very next day, AIPAC announced it was “honored” to host Netanyahu at its conference.

PAST ACTION - SIGN THE PETITION to Netanyahu and Gantz: NO to Annexation, YES to Peace!
PAST ACTION - Tell Jared: Keep the "Peace Plan" to Yourself - APN PETITION STILL GATHERING NAMES
PAST ACTION: Sign the Petition to President-elect Joe Biden - Reverse Trump’s Course and Advance Israeli-Palestinian Peace
APN to AIPAC: Disinvite Netanyahu from the AIPAC Policy Conference
PAST ACTION: Urge your Rep. to sign! - House Anti-Annexation Letter to PM Netanyahu and ministers
PAST ACTION: Tell Congress to Halt the Push to War Against Iran
LAST DAY TO TAKE ACTION: Prevent an unjust eviction in East Jerusalem