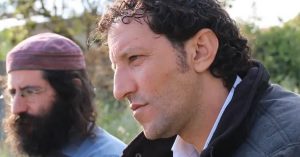 Last Friday, Palestinian community organizer and activist Ali Abu Awwad gave a stirring speech at an APN cosponsored event held at the Middle East Institute.  In particular, Abu Awwad described his own life story, including being raised by an activist mother who was beaten and brutalized by Israeli security forces, and participating in the First Intifada, as a desperate and angry boy picking up stones to confront an overwhelming military force.

Through his anecdotes, Abu Awwad spoke to the broader political education that many Palestinians receive by virtue of living under occupation and experiencing military detention.  He poignantly expressed that a process of dehumanization is inherent to the occupation, whereby no textbook is needed to learn to hate; Israeli settler children and Palestinian children grow up learning to hate “the other” whether it be a protester holding a rock or a soldier carrying a gun.

Emerging from these experiences, Abu Awwad has devoted his life, and his life’s work, to nonviolent civil disobedience, which he describes as more than a single action or event; it is a continuous life choice, involving the pursuit of social change, reconciliation, and justice.  Inspired by the writings of Mahatma Gandhi, Nelson Mandela, and Martin Luther King Jr., Abu Awwad founded Taghyeer (Change), an organization which works to inspire nonviolent action and civic participation to effect social change in Palestinian society.  Taghyeer applies crucial resources to working with youth and women and hosts organizing projects to build community and support nonviolent systemic change.

As part of this process, Abu Awwad highlighted a number of initiatives, including holding nonviolent mass protests as well as addressing the connections between Israel’s occupation of the West Bank and Palestinian social problems, including pollution, corruption, and violence against women.

To learn more about Ali Abu Awwad’s journey, and his inspiring vision, please check out his Jerusalem Ted Talk, available at: https://www.youtube.com/watch?v=BzDEFAGv_hc