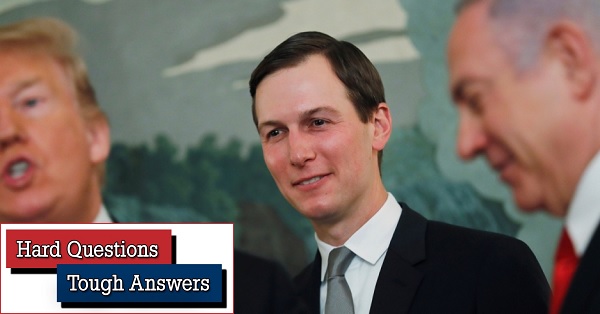 A. No. They have a very nuanced history of more than 50 years of attempting to map out solutions. They go all the way back to 1967 and in one case 1948. The Trump-Kushner plan borrows from that history. It then proceeds to ignore both the nuances and the lessons learned from failed peacemaking in this regard as well as current realities of Jewish-Arab coexistence.

This apparently corresponds with Jared Kushner’s admonition to the conflicted parties to ‘forget history’ and look only to the future. This is particularly (and pathetically) interesting because those “25 books about the conflict” that Kushner says he read almost certainly deal primarily with its history.

Specifically, we are looking at the Trump/Kushner plan’s disposition of the Jordan Valley, the ‘Triangle’ and the Negev south of the Gaza Strip. Full disclosure: I was involved back in the ‘90s in researching, writing, dialoguing and advising on these issues within the framework of the Oslo process. So I know the details of Kushner’s point of departure.

A. From almost the moment the 1967 Six-Day War ended, with Israel occupying the entire West Bank, Israeli strategic thinkers designated the Jordan Valley as Israel’s security border looking east. The thinking was geographical and historical. Under the British Mandate prior to 1948 the Jordan Valley was the eastern border of Palestine/Land of Israel. After 1967 the sub-sea-level Valley and the high West Bank escarpment to its west constituted a natural barrier against enemy invaders from the east such as Jordan itself and Iraq in 1948 and 1967. The Valley itself is dry and extremely hot, hence lightly populated. It gives Israel, with its narrow pre-1967 boundaries in the center of the country, strategic depth.

These factors gave rise after 1967 under Labor governments in Israel to at least two schemes for incorporating the Jordan Valley into the state in a final peace settlement, whether negotiated with Jordan or the Palestinians: the Allon Plan and the “Dual Corridor” (Sdera Kfula) plan. These schemes, in turn, justified grandiose attempts by Israel to develop desert agriculture and settle farmers in the Valley in order to secure it for Israel’s strategic interests. The Dual Corridor plan envisioned in the early 1970s settling no fewer than two million Israelis in the Golan Heights/Jordan Valley/Arava eastern-Land of Israel corridor by the year 2000.

From a demographic-geographic standpoint, all these schemes have failed. Today, in 2020, there are only 8,000 settlers in the Jordan Valley and fewer than 50,000 in the entire corridor. Most of these Israelis are not religiously committed to the Greater Land of Israel. Meanwhile, in the Jordan Valley, Israeli agricultural enterprises have attracted more than 8,000 Arab laborers and their families.

So much for demography. Agriculturally, date and olive cultivation has succeeded, but little else. By and large, the extreme summer heat deters the arrival of more inhabitants.

From a security standpoint, on the other hand, decades of negotiations have established both Jordanian and Palestinian recognition of Israel’s claim to an ongoing security presence in the Jordan Valley, regardless of the way the map is drawn. Israel can sustain this claim as long as there is a prospect of security threats from the east--these days, Iran--and as long as there is security sensitivity in Jordan as well as Israel regarding the danger of Palestinian terrorist infiltration in either direction.

But a security presence does not require annexation. There is simply no justification, other than a greedy, land-grab reading of the Bible, for Kushner’s annexation proposal.

Q. Now turn to the Triangle border alteration proposal. Is this “transfer”?

A. Writing in late 1994, I was possibly the first Israeli to point to the Triangle territory as a possible quid pro quo for a West Bank Palestinian state in exchange for Israel annexing the settlement blocs that hug the green line armistice line to its east. I listed it along with additional Israeli lands to the north and south of the West Bank green line and to the south of the Gaza Strip (more on that below).

There was a historical backdrop: some of the Triangle land, ranging along the green line from Qafr Qasim in the south to Umm al Fahm in the north, along with Wadi Ara, had been occupied by the Iraqi army at the end of Israel’s 1948 War of Independence. Between these lands and the Mediterranean lies what used to be called Israel’s “narrow waist”. In 1948-49, Wadi Ara was deemed important for passage from the coast to the Galilee, and Wadi Ara and the Triangle important for strategic depth.

Never mind that this added large numbers of Palestinians to Israel’s population; that was the strategic order of priorities back then. So Israel threatened to renew the fighting unless the Iraqis withdrew and the land became part of the nascent state--which is what happened.

There was also a Palestinian nationalist-religious backdrop: in the 1990s some of the Triangle Arab villages had strong Islamic movements that agitated for becoming part of a Palestinian state.

There are precedents for moving borders in this way in a variety of European peace agreements from the nineteenth century and after WWI. But when I made the proposal, I pointed out that from an Israeli constitutional standpoint and in view of modern human rights standards, moving the border could not be construed to mean “transfer” in the sense of expelling Triangle Arab inhabitants or cancelling the Israeli citizenship of the Arabs in these towns and villages. Indeed, Israel could not even move the border without consulting the Israeli citizens involved. If the border were to be moved, these Arab citizens would be free to relocate into alternative Israeli towns and cities.

In the end, opinion polls showed that most Triangle residents opposed the idea of living in Palestine; they by far prefer being Israelis. So too, by the way, might some 400,000 Palestinians living in those parts of the West Bank that the Trump-Kushner plan assigns to Israel.

So there is no demographic bargain here for Israeli Jews. Nor is there a military strategic need. An Israeli military presence in the Jordan Valley, coupled with demilitarization of a West Bank Palestinian state, more than compensates for lack of strategic depth at the narrow waist. (Just as superhighways and tunnels have long since rendered Wadi Ara superfluous for transportation from the coast to the Galilee.)

Over the course of the past 25 years, the Triangle border-moving idea has been adopted by Israeli right-wing politician Avigdor Liberman, a racist who is prepared to ignore the human rights of Israeli Arab citizens and wants to annex lots of settlements (he lives in one) and “pay” with the Triangle. Then too, the past two decades and a half have witnessed the extraordinary and most welcome integration of the Triangle’s Arab residents into the Israeli economy. They are doctors and nurses, lawyers, hi-tech entrepreneurs and cable TV executives. They are part and parcel of the fabric of Israeli life. The busy Trans-Israel Highway, Route 6, named after Yitzhak Rabin, runs right through the Triangle.

Q. And those two Gazan Palestinian enclaves Kushner drew on the map of the Negev, one for agriculture and one for high tech, hugging the Egyptian border but not contiguous with the Gaza Strip? Where did they come from?

A. I recall meeting with a distinguished Israeli city planner about 30 years ago to ask him how he had the chutzpah to publish a map showing a major inter-city highway running right through my house north of Tel Aviv. He shrugged. In an ideal world, he explained, this is where a highway should go. But as long as I and my neighbors lived where we lived, we had nothing to worry about.

I can imagine real-estate mogul Jared Kushner thinking along the same lines when he drew those enclaves in the Negev. The Gaza Strip is overcrowded; Egypt won’t cede its sovereign territory in Sinai to let the Strip expand; Kushner’s plan will solve the connectivity problems with roads, bridges and tunnels, like the one projected to connect Gaza to the West Bank. Kushner’s map draws a circle around two more-or-less empty stretches of desert well south of the Strip along the Egyptian border; a border road can attach them to one another and to the Strip. Like settlement-Palestinian coexistence deep inside the West Bank that is to be facilitated by bridges and tunnels, Kushner will do the same here between the Palestinian enclaves and their Israeli neighbors (who are not settlers and are desert pioneers in the true sense of the term).

Back in late 1994, I suggested considering expansion of the Strip by attaching to it Israeli agricultural lands abutting it to the east and south. Not enclaves, but rather, territorial expansion of the Strip at Israel’s expense. Israeli kibbutzim adjacent to the Strip would have to pay a price by giving up some of their lands and possibly even moving further inland. I noted that the Gaza Strip could also be expanded into the Mediterranean with landfill, almost without limit. This would compensate a Palestinian state for Israeli annexation of settlement blocs.

Here again, Kushner simply mangled the rational concepts that informed the past 25 years of attempts to draw a territorial map of a two-state settlement that separates two states and two peoples. True, in their day those attempts, by Ehud Barak, Ehud Olmert and John Kerry, failed. Worse, the past two and a half decades have witnessed ever greater territorial and demographic forced integration of settlements and Palestinians and empowerment of the settler ultra-nationalist ideology, to the extent of rendering almost impossible a rational geographical two-state solution.

A. Forget for the moment that the deal of the century ignores or negates the Palestinian case regarding Jerusalem, refugees, and economic and security sovereignty. Forget that it ignores Jordan’s vital stake in a fair Palestinian resolution. When it comes to territory, Kushner has come up with a unique concept that solves no problems but creates a huge new one.

The Trump deal of the century will simply integrate the two states territorially. Israel will surround the West Bank part of the Palestinian state on all sides. That state will give up the Jordan Valley but get the Triangle. It will be separated into four parts: the West Bank, the Gaza Strip, and two enclaves in the Negev. The largest part by far, the West Bank, will itself look like Swiss cheese because it must encompass every single Israeli settlement built in its midst.

The original concept of attaching Gaza to the West Bank with a 42-km. long tunnel or semi-sovereign road that cuts Israel in half was always considered logistically the most problematic aspect of a two-state solution. Now the Trump plan has given birth to dozens of tunnels, bridges and roads, all impossible to justify or physically defend, throughout the West Bank.

At the territorial level alone, there is only one way logically to explain this map. It is a one-state solution based on Jewish biblical rights as interpreted by the Orthodox Jews who drafted it. The Palestinians in their many enclaves will be compensated economically for lacking any semblance of sovereignty. They’ll have individual rights and limited communal autonomy more or less like they have today.

Call it apartheid or call it autonomy. Call it status quo or call it the best we can do under circumstances of extreme deal-breaker Palestinian demands, Israeli messianic ultra-nationalism, growing Arab indifference to the Palestinians, and Arab need for Israel as an anti-Iran ally.

Call it any of these names. But please, Mr. Kushner, please have enough respect for the integrity and intelligence of thinking Arabs and Jews not to call this a two-state solution.