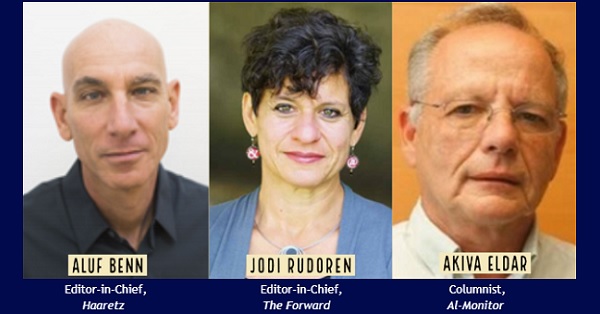 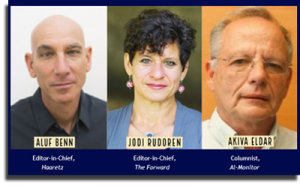 Join us for our upcoming live webinar (accessed via computer or phone), co-sponsored by APN and Partners for Progressive Israel:

"Deal of the Century": What Now for the Israeli Left?

Donald Trump and Binyamin Netanyahu recently announced a new plan for Israel and Palestine weighted heavily in favor of those in Israel who support annexation of the West Bank and reject the internationally accepted parameters for a viable two-state solution.

With unilateral Israeli annexation of a large portion of the West Bank on the near horizon, does the Trump plan mark the end of the road for the two-state solution? Must the Israeli left now formulate a new paradigm for the future?

Aluf Benn is the editor-in-chief of Haaretz, Israel’s elite newspaper (www.haaretz.com). A veteran of Haaretz since 1989, Benn held several writing and editing positions in the paper, including diplomatic correspondent, chief news editor and opinion editor. He covered six Israeli prime ministers from Yitzhak Rabin through Binyamin Netanyahu’s second term. His work appeared in The New York Times, The Washington Post, Foreign Affairs, Newsweek, and The Guardian. He holds a joint MBA degree from the Kellogg School of Management at Northwestern University and the Recanati School of Business at Tel Aviv University.

Akiva Eldar is a columnist for Al-Monitor’s Israel Pulse. He was formerly a senior columnist and editorial writer for Haaretz and also served as the Hebrew daily’s U.S. bureau chief and diplomatic correspondent. His most recent book (with Idith Zertal), Lords of the Land, on the Jewish settlements, was on the best-seller list in Israel and has been translated into English, French, German and Arabic.

Jodi Rudoren became Editor-in-Chief of The Forward, the nation's oldest independent Jewish news organization, in September 2019 after more than two decades as a reporter and editor at The New York Times. She is helping lead a transformation of the storied 123-year-old institution, a nonprofit that went digital-only in early 2019.
At The Times, Jodi served as Jerusalem bureau chief from 2012 through 2015, covering two Israeli elections and two wars in Gaza. She previously covered the 2004 American presidential campaign, and served as Chicago bureau chief, education correspondent and education editor, and deputy on both the Metropolitan and International desks, before joining the masthead as Associate Managing Editor for Audience Strategy.
A longtime digital innovator, Jodi was executive producer of the multimedia series "One in 8 Million," which won NYTimes.com's first Emmy Award, in 2009, and served on the 2020 committee about the newsroom of the future. She also serves on the Board of Directors of the Fuller Project, a nonprofit newsroom doing groundbreaking investigative work on issues that affect women.
Jodi grew up in Newton, Mass., and graduated cum laude in 1992 from Yale University, where she was Managing Editor of The Yale Daily News. She and her husband, Gary, combined their surnames in 2006 and live in Montclair, NJ, with their twins, who just turned 12.