Yossi Alpher - Soul Searching with a Black Banner - "As I demonstrate against Netanyahu, black banner and Israel flag in hand . . ."

As I demonstrate against Netanyahu, black banner and Israel flag in hand . . . 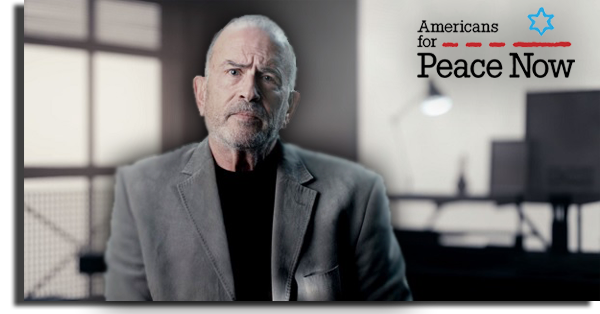 Early Saturday evening. I stand at a busy junction not far from my house. I wave a flag of Israel and a black banner. With me are around 25 neighbors. We are strangers to one another, having been drawn togetheer solely by the drive to protest against Prime Minister Netanyahu--Bibi.

Because we are all spaced two or more meters apart and all wearing masks and waving flags, and because tides of approving drivers honk as they go by, and because we are not exactly old friends, we broadly avoid conversation while we demonstrate against Bibi. So I have the time and opportunity to think. Indeed, to think in depth, insofar as I’m one of those Jews who searches their soul every day rather than specifically on Yom Kippur.

The first and inevitable thought that crosses my mind as I stand in silence is, what good is this doing? I and tens of thousands of fellow Israelis line up at more than 300 traffic junctions and bridges spanning superhighways across Israel, demonstrating week after week. The younger and more adventuresome demonstrate in huge numbers outside PM Netanyahu’s residences. We are constantly growing, our numbers swelled by the apprehensions Netanyahu has instilled in us. 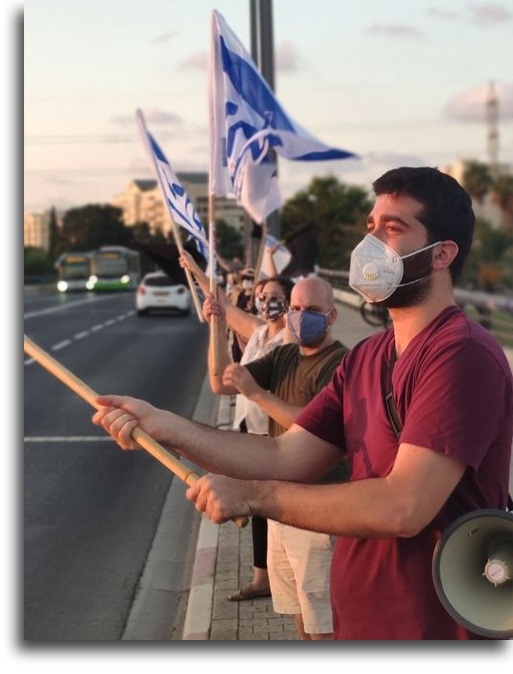 (Pictured: Peace Now activists at one of the many small street protests happening across Israel)

Yet we are not persuading the prime minister to own up to his criminal indictments and his colossal corona-related failure of leadership and governance. He will not step aside. We, Israelis of conscience, are up against a man without a conscience. He retweets his son calling us “aliens from outer space.”

Then my mind begins to wander to my grandchildren and the legacy my generation will leave them. Of course, confronting the summer heat and humidity, there is a frightening and destructive environmental legacy. And confronting covid-19, it is easy to imagine future pandemics. But my grandchildren will, I’m fairly certain, be adept at finding hi-tech solutions to these threats.

The real legacy that I think about while standing there with my neighbors is the threat we are not demonstrating against. We are not calling Netanyahu to account on Saturday evenings regarding his worst crime of all. The crime of slowly but surely turning Israel and Palestine into a single, apartheid-like political entity. The crime of dismantling the Jewish and democratic Israel I arrived at almost 60 years ago as a secular Zionist.

Sure, the Palestinians bear a major portion of the blame. Who knows that better than me, a veteran dialoguer and peace researcher? But as I search my soul on Saturday evenings, I don’t see much hope that something on the Palestinian side will soon change for the better. Like it or not, this means it’s up to us Israelis to prevent this crime and save both our peoples from an ugly apartheid reality under an ultra-nationalist messianic government.

Fifty years from now, Bibi’s apartheid crime will be painfully obvious to my great-grandchildren. But now, if we note it high on the list of our grievances against Bibi as we fly our flags, we’ll lose a lot of supporters who either don’t care or are simply far more troubled by his corruption trial, his corona failures and their emptying bank accounts. It’s hard to compete with the pain of panic and the arrogance of ignorance.

A gloomy picture. And yet, and yet . . . our numbers grow, our faith in change perseveres. “The protest,” writes David Grossman, speaking for all of us, “reawakens in us a sense of relief. After years of lies, we finally hear words of truth.” This is “the energy of those who must breach the sense of suffocation.”

I assume American readers will find familiar elements in my words. There are clearly universal themes in the insights I dredge up while soul searching on a street corner in a suburb of Tel Aviv. Elsewhere, too, liberals confront ultra-nationalists, democrats confront messianists, and science confronts ignorance and hypocrisy.

But in Israel the lines are truly starkly drawn. In the age of corona, the ultra-nationalists and ultra-Orthodox messianists argue, if we can’t pray inside crowded synagogues and infect one another, you can’t demonstrate outdoors, with masks, even though there is no evidence of infection on your street-corners and bridges or opposite the PM’s residence. In our Orwellian world, the right to demonstrate peacefully outdoors and the right to pray and infect indoors are equivalent. Democracy and extreme religiosity are equivalent. Netanyahu, not at all a religious person but a total cynic, is of course happy to cite a corona rationale and ban those pesky demonstrations. 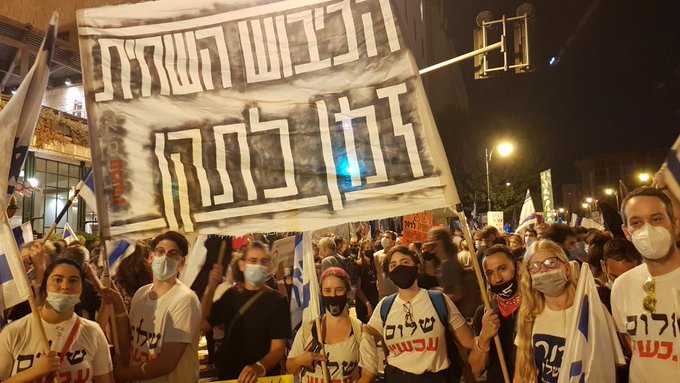 Yes, Bibi disdains us. But one indisputable positive factor in standing on a street corner with our flags is solidarity. A growing mass of Israelis are fed up. Our numbers grow from week to week, urged on by a very pluralistic hodge-podge of volunteer groups with names like Black Flags and Crime Minister.

Here are two bizarre examples of that solidarity and the uplift it offers.

First, a stone’s throw away up the Mediterranean coast is Lebanon. It is more badly messed up than Israel in every sense: ethnic and religious strife, corona, economic crisis, leadership deficit, world-record corruption, external (Iran) interference. Shouldn’t this fact cheer me up? It means things here could be worse. It means, look at this from a Middle East perspective.

The other day I watched a zoom webinar about Beirut’s crisis following its horrendous early-August port explosion. The webinar was held by a Lebanese think tank. One of the unsung benefits of corona is the conversion of academic seminars to webinars, allowing people like me to zoom in on previously inaccessible intellectual activity in neighboring Arab states and even to send in questions and comments.

One of the Beirut panelists was an old friend, a Lebanese academic. Needless to say, we have not met personally for a while. As he and his colleagues bemoaned the country’s truly awful circumstances, I couldn’t resist. I sent him an email: “Hey, you guys are more f­***ed up than Israel!”

I watched on my laptop as he, facing his zoom camera, pulled out his phone, summoned up the email, read, looked right at me and smiled sadly. Solidarity from Beirut. A confirmation of our increasingly Levantine identity.

Second, and more uplifting, as I and my neighbors settle into our street-corner demonstration a motorcycle cop pulls up, blue lights flashing and visored helmet obscuring his face. Aren’t these the intimidating guys usually sent by Bibi’s minister of internal security to detain and rough up those demonstrating against him?

“Who’s in charge here?" the cop asks me. I point to our WhatsApp convener, wondering, is the cop checking for a license to demonstrate? Do 25 neighbors now need a license to stand with flags on a street corner? “Hey”, the cop addresses the convener. “Take my mobile number. If anyone harasses you, call me.”

Go HERE for the archive of all the weekly issue briefs.

Thank you for your support of Americans for Peace Now with a tax-deductible donation.

Hard Questions, Tough Answers with Yossi Alpher (August 31, 2020) - Why can’t the Start-Up Nation turn the corner on Covid-19?
Legislative Round-Up- October 28, 2022
Matching Donation Grant Still Active - "This Is Not A Moment, It's The Movement" - Letter from new APN President and CEO
We Welcome The New Year And The Change We Hope It Brings
Legislative Round-Up- November 4, 2022
Message of Hope and Commitment, and Supporting APN, from Hagit Ofran, Peace Now Settlement Watch Director
Legislative Round-Up- December 2nd, 2022