Ginna Green: "I am grateful to be on this road with you"

Earlier this fall, when my friend Hadar asked me to be a part of APN’s commemoration of Prime Minister Yitzhak Rabin, marking 25 years since he was killed at a peace rally in Tel Aviv, I immediately said yes. For not only am I, like Hadar and all of you, a seeker of justice and peace and have dedicated my life to healing the world, but Prime Minister Rabin holds a particular place in my history and my heart.

Those of you who heard me speak in October may remember that I described how Rabin’s assassination took place in my senior year of high school. Each graduating senior was asked to give a senior speech around the time of their birthday. After dithering and waiting to write my speech, unsure as to what I would say that might sound prophetic or at least a little bit interesting, as I watched the terrible news unfold on November 4, 1995, I knew at last what I would talk about. 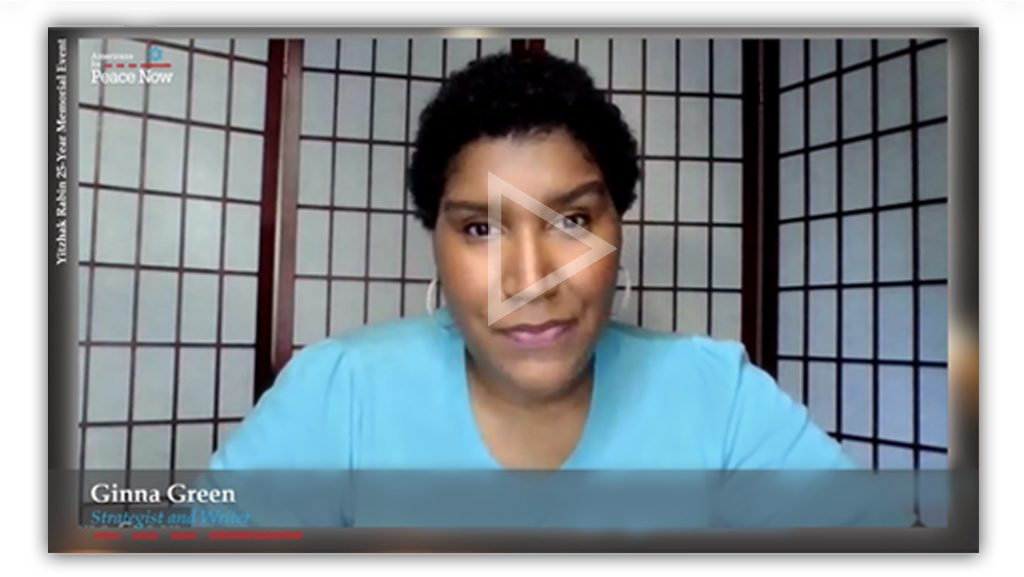 Yitzhak Rabin was a complex and polarizing figure; a decorated and strategic military general, he made some terrible and brutal choices in the name of protecting Israel. As Prime Minister, who was elected to serve the country he helped build, he held fast to a gruff, non-wavering commitment to Israel’s security. But he was also a man who, as he watched an unending conflict take its toll, became committed to the only thing that he grew to believe would lead Israel into its future – peace with Israel’s Palestinian neighbors, the same people on whom, as a general, he had waged war.

Rabin wasn’t perfect. No one is perfect, and this applies to all of us, including—sometimes especially—the leaders we elect and look to for hope and progress. But Rabin was special in that he opened himself up to a journey that led him through profound growth and change. He wound up giving his life to the belief that peace was the only way.

APN has always believed that peace is the only way. As a supporter of the leading organization in the United States dedicated to fighting for and achieving peace between Israelis and Palestinians, you are the change agents we need today. Yitzhak Rabin’s shift in perception and commitment enabled him to grow to lead us towards peace, but APN was already there, steadfast and grounded in this belief for nearly 40 years.

I am grateful to be on this road with you. And in this challenging year, when everything is at stake, APN is grateful to you for your loyal and generous support of its work to keep peace at the top of the agenda.

Please consider making a gift to APN at this time to keep us on the road to peace. And thank you for helping light the way for all of us.