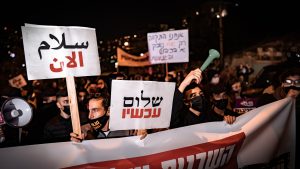 Our Israeli Peace Now partners organized a demonstration at the East Jerusalem Palestinian neighborhood of Silwan to protest the dispossession of Palestinian families by extremist Jewish settlers. Peace Now activists demonstrated shoulder-to-shoulder with Silwan’s Palestinian residents, and then marched with them to join the weekly anti-Netanyahu demonstration opposite the Prime Minister’s residence in West Jerusalem’s Balfour Street.

This was a first.

At our request, Shalom Achshav live-streamed the demonstration and the march with English language commentary. You can watch a short recap of the event here or the entire two-and-a-half-hour feed here.

By organizing this extraordinary joint action, our Israeli sister organization Peace Now accomplished an important feat, which was not lost on the Israeli mainstream media.

By organizing this action, Israel’s peace movement built a bridge between the corruption that the occupation represents and Netanyahu’s corruption, the focus of the weekly demonstrations of the past eight months. Peace Now bridged the gap between the Israeli government’s contempt for Palestinian rights and its contempt for democracy and the rule of law. It built a bridge between the occupation and the matters pertaining to domestic public life that bother Israelis.

It used that bridge to bring the occupation, literally, to the forefront of Israel’s progressive protest.