In Memory of Mordechai (Morale) Bar-On 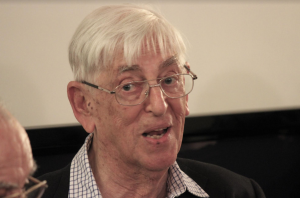 Israeli society bid farewell this week to one of its giants, Mordechai (Morale) Bar-On, a person who helped build the state and was among the icons of its peace movement and its progressive camp. Morale was among the leaders of APN’s Israeli sister-organization, Shalom Achshav (Peace Now), and wrote a book that documented Israel’s peace movement. Bar-On passed away at 92.

Like many prominent leaders of Israel’s peace movement, Bar-On was a soldier and a general, having volunteered for the pre-state Hagana at the age of 14. He attended the Hagana’s first officers’ course in 1948 and was injured in the War of Independence several months later. In the mid-1950s, he was the personal assistant of then IDF Chief of Staff Moshe Dayan. In the 1960s he served as the IDF’s chief education officer. His intellect and commanding personality made him an Israeli icon. After the 1967 war, then IDF Chief of Staff Yitzhak Rabin chose Bar-On to write Rabin’s famous Mount Scopus speech.

Shortly after it was established in 1978, Bar-On joined the leadership of Shalom Achshav. Around the same time, he also joined the Council on Peace and Security, which in the late 1970s and early 1980s focused on dialogue between Israeli and Palestinian intellectuals. That included Palestinians who identified with the PLO. In 1984, when associating with Palestinian Liberation Organization officials was still illegal for Israeli citizens, Bar-On went on a speaking tour in the United States with the former mayor of the West Bank town of Halhoul, Muhammad Milhem, who was deported from the West Bank for his PLO connections. The two jointly advanced a two-state agenda. Forty million Americans watched a PBS documentary about the joint speaking tour.

Bar-On continued with an academic career and a career in public life, which included a short service as a member of Knesset representing the progressive Ratz party (1984-1986), the party that later became Meretz. Bar-On also served as the president of the New Israel Fund.

Among our pro-peace community, Morale Bar-on was often referred to as a moral compass of the peace movement. He was a highly appreciated and beloved elder of our “tribe.” He will be sorely missed. His memory is a blessing to us all.