Webinar Recording - Six Palestinian NGOs Designated as "Terrorist Organizations": What Happened and Why 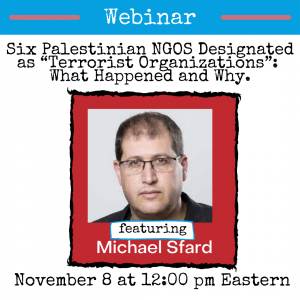 Two weeks ago, Israeli Defense Minister Benny Gantz announced the designation of 6 prominent Palestinian West Bank NGO’s as “terrorist organizations”. Shortly thereafter the United States State Department asked for clarification. Additionally, members of Congress have asked to be briefed on the evidence. Given that the public has not seen that evidence, there has been widespread speculation on the contents of the allegations and the dossier presented, the validity of the claims, and on the possible political motivations behind this designation.

If true, why hasn’t Israel publicized its case against the six? Why has it opted to take administrative rather than legal actions against them? What are the implications of this designation for these NGO and for the rest of Palestinian civil society, and for their allies in Israel and in the international community?

For answers to these and other questions regarding this affair, Michael Sfard, one of Israel’s preeminent human rights lawyers, joined APN to discuss this situation.

Michael Sfard is one of Israel’s leading human rights lawyers, representing – among others – Israel’s Peace Now movement. He received the Emil Grunzweig Human Rights Award from the Association for Civil Rights in Israel and an Open Society Fellowship. His writing on human rights has appeared in The New York Times, Haaretz, The Independent, and Foreign Policy. In 2018, Sfard published his acclaimed book, The Wall and the Gate: Israel, Palestine, and the Legal Battle for Human Rights. He lives in Tel Aviv.