Avraham Gavriel Yehoshua, better known by his pen name A.B. Yehoshua, and among his friends by his nickname Buli, died Tuesday at age 85 after a long fight with cancer.

Yehoshua was not only one of Israel’s leading authors – the New York Times called him the “Israeli Faulkner” – but also one of the leaders of Israel’s peace camp and a friend of Israel’s Peace Now movement and of Americans for Peace Now. 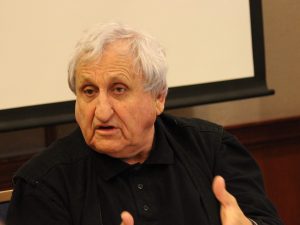 APN leaders met with Yehoshua several times. In 2009, he wrote a letter to our supporters and activists, encouraging them to take action in support of peace. “I don’t simply worry silently. I write and I speak out about the grave mistakes we are making. And I encourage others to do the same and become active with Peace Now,” he wrote, and concluded, "My friends, Israel is capable of doing miraculous things, heroic things. I’ve seen them happen throughout my life. Surely a country that can do countless heroic things can find a way to peace."

Like many others, Yehoshua had grown increasingly skeptical about the prospects of reaching and implementing a two-state solution to the Israeli-Palestinian conflict, but continued to vociferously support peace between Israel and the Palestinians.

Yehoshua’s memory, as well as his literary and political legacy, are a blessing. May he rest in peace.

Boston Globe eulogy for APN Board member: Leonard Fein, at 80; illuminated roles of America’s Jews
My tenure as CEO is ending...
APN High Holiday Letter from President & CEO Hadar Susskind
"Our organization is all about that pursuit" - Letter from Letty Cottin Pogrebin, APN Board Member
Secretary Kerry's Saban Forum Speech: Save the Two-State Solution
APN CEO Debra DeLee in the Jewish Journal: When the Knesset tries to muzzle free speech