APN's Debra Shushan on CGTN's "The Heat" re: Trump and Denial of Entry to Omar and Tlaib

Check out these excerpts featuring Debra Shushan, APN Director of Policy and Government Relations, on CGTN's "The Heat" from August 19, 2019, on the topic: "Israel Denies Entry to Two Members of US Congress."

The much-touted shared values between the U.S. and Israel no longer seem to include liberal protections for free speech.

By Debra Shushan, director of policy and government relations at Americans for Peace Now

The U.S.-Israel relationship suffered a profound setback Thursday. Israeli Interior Minister Aryeh Deri confirmed that Israel would bar two members of Congress, Democratic Reps. Rashida Tlaib and Ilhan Omar, from entering Israel because of their support for the BDS movement, which calls for boycotts, divestment and sanctions on Israel.

Thursday’s decision to deny Tlaib and Omar entrance to Israel reversed the earlier position expressed by Israeli Ambassador to the U.S. Ron Dermer, who in July said that “Out of respect for the U.S. Congress and the great alliance between Israel and America, we would not deny entry to any member of Congress into Israel.”

With Netanyahu surpassing the country’s founding prime minister, David Ben-Gurion, as Israel’s longest-serving leader, Israel’s democracy is in a state of perilous decline.

The policy Dermer articulated should be expected of a U.S. ally that is also the top recipient of U.S. foreign aid ($38 billion in security assistance over 10 years). Overturning that policy can only be interpreted as a sign of disrespect for the U.S. representatives democratically elected by American voters. Worse yet, with President Donald Trump pushing the change, it also demonstrates the disrespect for democratic institutions both country’s leaders are increasingly embracing — and their willingness to turn the U.S.-Israel relationship into a political football to advance their own interests.

Go HERE to read a summary of Peace Now's report: Return of the Outpost Method.

Go HERE to watch a short video of Peace Now's protest in the West Bank that coincided with the release of the report, including confrontations with the Israeli police. 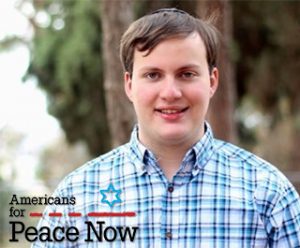 Last week, J Street U, the campus arm of J Street, wrapped up its inaugural free trip to Israel for Jewish college students. The “Let My People Know” trip was conceived as a response to protests against Birthright, which does not include meetings with Palestinians on its trips, or discussions about the occupation.

While the debate around Birthright has received significant national attention, there are some Israel tours for college students that are going unnoticed. These trips are led by organizations with explicit right-wing political agendas that have a dangerous potential to affect young US Jews’ understanding of Israel and the occupation in the years to come.

Groups like Hasbara Fellowships (HF) and the Zionist Organization of America (ZOA) recruit to their tours Jewish and pro-Israel leaders on campuses. They attempt to inculcate in these leaders support for the occupation and illiberal Israeli policies, such as displacement of Bedouin Israelis from their villages in the Negev.

How do I know? I participated in ZOA and Hasbara tours for campus leaders. I witnessed firsthand their efforts to generate support for extremist policies and their attempts to brand dissent as anti-Israel.

APN's Ori Nir in Ha'aretz: "Religious Fanatics Have Hijacked America's Israel Policy. And They're Not Even Evangelicals"

With ten-pound hammers in their hands and ecstatic religious-nationalist zeal in their hearts, U.S. Ambassador to Israel David Friedman and White House Special Representative for International Negotiations Jason Greenblatt stood underneath the most religiously volatile place on earth, and smashed a wall – and with it, any last semblance of reasonable U.S. policy towards the Israeli-Palestinian conflict.

Debra Shushan, APN Director of Policy and Government Relations, appeared on a panel for TRT's "The Newsmakers".  See a clip of Debra speaking on the Trump Administration's "Peace Plan" and its statements and actions contrary to a two-state solution.