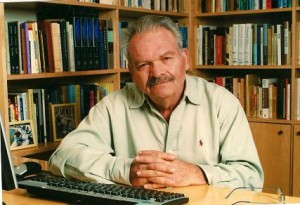 Prof. Menachem Brinker, a co-founder of Israel’s Peace Now movement, an Israel Prize laureate in Hebrew Literature and a member of the Israeli Academy of Sciences and Humanities, died Thursday in Jerusalem at 81, after a long struggle with cancer.

Brinker became a prominent political activist after the Six Day war. He helped found two movements, which at the time countered the post-1967 “Greater Israel” movement. He co-founded the left-wing magazine Emda (Position), and was its first editor. In the late 1970s, he co-founded Peace Now, Israel’s preeminent peace movement, and was one of its leaders. He helped chart the organization’s path in the late 1970s and well into the 1980s and 1990s, in parallel to his academic pursuits.

Academically, Brinker had an unusually broad wingspan. His research and commentary featured Hebrew literature, philosophy, the relationship between philosophy and literature, between literature and society, and more. He wrote about modern Israeli society, about Jean Paul Sartre, and about Israeli politics. Brinker was one of the first to advocate for a two-state solution to the Israeli-Palestinian conflict and remained a staunch adherent of the two-states-for-two-peoples agenda.

Prof. Brinker left behind a daughter, Hagit, and his life-partner, Janet Aviad. His son, Gadi, died in 2010.

A week before his death, in an interview with Yedioth Ahronoth journalist Yigal Sarna, Brinker said: “I think there are enough liberal forces in Israel and among world Jewry who would block the efforts to establish here a religious dictatorship. Most world Jews are not Orthodox. And even the split here, on the right, between religious and secular, will prevent – I hope – the creation of a national-religious reality. Not all is lost, but there are going to be hard times for people like us.”