APN's Ori Nir in JWeekly: American Jewish progressives must act to defend their values in Israel

On a trip to Israel last month, I visited a friend who runs a small store in downtown Jerusalem, my hometown. Outside, on the street, there were dozens of young American Birthright tourists. “Business must be hopping, with all these Birthrighters,” I said. “Not quite,” my friend replied. “Their parents send them here with pocket money, but stay home in the U.S., with their credit cards.”

To my dismay, he said that as he saw it, American Jews don’t care enough about Israel’s future. They see Israel as a Jewish Disneyland of sorts, a place where they go for its history, but they don’t do enough to secure Israel’s future as a liberal democracy. This is not an unusual view among Israelis.

Albeit blunt, over-generalizing and overstated, my Israeli storeowner friend has a point. Sure, American Jews don’t vote in Israel. They don’t serve in the IDF and don’t pay taxes. They don’t have as much of a stake and as much of a say in Israel’s future as Israeli citizens do. But they definitely could do more to advance peace, reconciliation and tolerance in Israel, particularly when upsetting things are being done in Israel in their name.

Here is a case in point, which should concern all American Jews, right, left, Reform, Orthodox, affiliated and unaffiliated.

Walking from my friend’s store in downtown Jerusalem to fetch our car from an underground parking lot, my 16-year-old daughter noticed a colossal concrete structure under construction. “Oh, that’s the Museum of Tolerance,” I told her. An American Jewish organization, the Wiesenthal Center, is building a museum, in the name of tolerance, smack on Jerusalem’s historic Muslim cemetery. Yes, I’m serious. Bones had been dug up and moved to allow for this monstrosity to rise, over the protest of Israel’s Muslim community and of many Israeli Jews.

My daughter couldn’t believe it. “Doesn’t this bother American Jews?” she asked. “I mean, it’s kind of done in their name.” 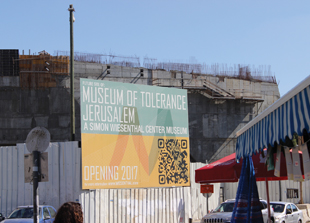 American Jews had a chance to act to stop this travesty, to demand that the Wiesenthal Center choose an alternative site rather than practice “tolerance” while offending Muslims. Thirty-five percent of Jerusalem residents and 17 percent of Israel’s citizens are Muslims. Unfortunately, aside from several organizations — mine among them — American Jews did not act.

Today, large signs on and around its concrete walls say that the Museum of Tolerance will open to the public in March 2017. It’s a done deal.

What can be done? Boycotting the museum will be ineffective. It certainly won’t advance tolerance. Instead, why not stand with those who do work to promote peace and reconciliation? So many Israelis, Jews and Arabs, routinely seek peace and pursue it, practice tolerance, acceptance and peaceful coexistence. Their work is facilitated by dozens of civil society organizations that champion these values and work on the ground to advance them. Israeli organizations that work for peace and tolerance abound.

Americans and others who care have a broad choice of organizations and initiatives to support, whether financially or morally. Regardless of your preferred scenario for resolving the Israeli-Palestinian conflict and whether you support the current Israeli government’s policies, it’s hard to argue that real tolerance and open-mindedness are not an Israeli national security interest.

American Jewish organizations — federations, human and civil rights groups, religious movements and individual synagogues — could get involved to advance such values by partnering with Israeli organizations who espouse a tolerant, peace-seeking agenda.

Even the Wiesenthal Center could do its part and somewhat make up for being so ethically obtuse.

This article appeared first on September 15, 2016 at JWeekly.com.