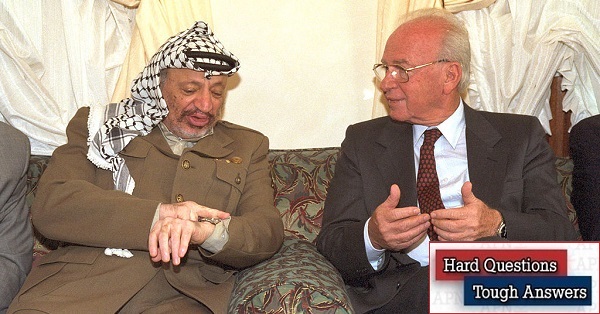 Q. Sept. 13 marks the twenty-fifth anniversary of the signing of the Oslo Declaration of Principles on the White House lawn. Is this a celebration of the vitality of the two-state solution or a memorial to a dead peace process?

A. Sadly, it is the latter. The Oslo process is dead and we, Israelis and Palestinians, are sliding down a slippery slope toward an ugly, conflicted one-state reality.

Q. When in your view did the process die?

A. September 2008, ten years ago. It was then that PM Ehud Olmert made a far-reaching final status offer to Palestinian leader Mahmoud Abbas and Abbas turned him down. “The gaps were too wide,” Abbas stated several times publicly in early 2009.

Of course there were mitigating circumstances. There always are. In this case, Olmert was a lame-duck leader, a fact that points to the weakness of the Israeli political system as yet another cause for Oslo’s failure. Since 2008, Israeli and Palestinian leaders have not negotiated directly. In any case, neither leader is remotely likely to make an offer that would bridge the gaps Abbas very honestly pointed to. The circumstances of 2008 are not likely to repeat themselves.

Q. Is there a living Oslo legacy?

A. Definitely. The Oslo “process” may be defunct but Oslo’s successes and failures remain with us. In a multitude of ways, they continue to define Israeli-Palestinian and even Israel-Arab relations. For example, while the Oslo DOP did not define a two-state solution as the end-game of negotiations--indeed, then PM Rabin himself did not directly endorse the two-state solution--the emergence of a Palestinian state has become the yardstick by which Palestinians and the Arab states measure their readiness to normalize relations with Israel.

In a revealing essay published recently in Fathom on-line magazine, attorney Joel Singer sought to define the errors and successes of the Oslo process. Singer is the international legal expert who was charged by Rabin with turning a fuzzy and imprecise Oslo draft into the final document signed on Sept. 13. He continued to accompany the process in the ensuing years.

The three errors Singer points to are 1) trusting Yasser Arafat to be a willing and capable negotiating partner; 2) allowing the PLO to be responsible for internal security for Palestinians; and 3) failure to freeze settlement activity during the autonomy period. Here we can only note that avoiding the first two errors would have meant no agreement at all on the part of Arafat, and that the third error reflected, as with Olmert in 2008, the weakness of the Israeli political system. In other words, these errors were inevitable if Oslo was to see the light of day.

The three successes singled out by Singer are 1) mutual Israeli-Palestinian recognition; 2) opening the door to better relations between Israel and many Arab countries; and 3) creating a foundation for a future Israeli-Palestinian peace agreement. Sadly, I would dispute Singer’s success number three: the foundation was flawed and has collapsed. Note, too, that the Arab countries that entered into limited diplomatic relations with Israel as a “payoff” for Oslo—Morocco, Mauritania, Tunisia, Qatar, Bahrain, Oman—have since severed most official ties in parallel with the decline of the Oslo process.

Only Jordan-Israel diplomatic relations, made possible in 1994-95 as a consequence of the DOP, have survived the demise of the Oslo process. Meanwhile, Israel has developed strategic (but not diplomatic) relations with a host of Arab states. In both cases, the rationale for the relationship is no longer Oslo, but rather the shared threats posed by Iran and ISIS—both Islamist actors whose aggressive threats have little to do with the Palestinian issue.

Q. Does this imply “lessons” from Oslo that extend beyond the confines of a solution presented by the DOP?

A. We just alluded to one: the birth of Israel in 1948 is not the reason for Arab regime fragility and a Palestinian solution is not the key to Middle East stability. In recent years we have witnessed revolutions in no fewer than six Arab states and the emergence of Islamist threats and an Iranian hegemonic drive, none of which has anything to do with Palestine. This debunks a veteran argument made by Israel’s detractors.

Then too, the vicissitudes of Palestinian self-rule since the birth of Oslo point to the lack of state-building capacity as a Palestinian political and societal weakness that can be blamed only partially on Israel. The Hamas takeover of the Gaza Strip is one case-in-point. Corruption and the absence of solid quasi-state institutions in the West Bank-based Palestinian Authority are another. The absence of democratic processes in both the West Bank and Gaza positions the PA with the other failed Arab states in Israel’s neighborhood.

Finally, the years of trying to negotiate an Oslo-based final status agreement have taught some (though not all) of us that two related assumptions built into the Oslo process--additional “errors” in Singer’s terminology--are dangerously flawed. One flaw is that all the final status issues listed in the DOP’s “menu” for negotiation are somehow of equal origin and status. It took years for Israelis to understand that Oslo’s “pre-1967” narrative issues--the status of the holy places, the demand that Israel recognize the “right of return” of all 1948 refugees and their descendants, even the demand that Israel be recognized as a Jewish state--are different in origin and in solution. Accordingly they are far more difficult to resolve than post-1967 issues like borders and security.

A second, corollary issue is the flawed ground rule for negotiations according to which “nothing is agreed until everything is agreed”. Israelis and Palestinians could come close to agreeing, at Camp David in July 2000 and in the Olmert-Abbas talks of 2008, on post-1967 issues like borders, only to confront huge gaps in understanding of the pre-1967 issues, thereby guaranteeing failure.

Here it is noteworthy that the Trump peace team has fastened precisely on the pre-1967 issues of refugees and Jerusalem and claims to have “taken them off the negotiating table”. But by preempting the outcome of these two issues in Israel’s favor rather than simply insisting that the parties leave them for later until they have negotiated the outlines of a two-state solution, Trump has simply made matters worse. He has thereby demonstrated that he has learned either no lessons or the wrong lessons from Oslo--if he even knows what is written in the Oslo DOP.

Q. Other than this dubious innovation, has the Trump peace team come up with anything new to replace Oslo?

A. No. It’s fascinating to see how Mssrs. Kushner and Greenblatt, often apparently egged on by Netanyahu, are dredging up old, failed ideas for a solution. Lately we have heard talk of a Palestinian-Jordanian confederation. Didn’t Trump’s people hear from King Abdullah II of Jordan that he does not want any more Palestinian citizens or subjects? Didn’t they hear from Abbas that a trilateral confederation, including Israel, could be discussed only after the emergence of an independent Palestinian state?

Then there is the American team’s reliance on economic sticks and carrots. The US promises prosperity for the Gaza Strip and (separately) for the West Bank, as if this is an economic dispute to be resolved through “economic peace” that ostensibly puts food on the table. Didn’t Kushner and Greenblatt learn that Moshe Dayan’s original 1967 scheme for bringing prosperity to the Palestinians by erasing Israel’s green line boundaries with the West Bank and Gaza blew up in Israel’s face with the outbreak of the first intifada 20 years later?

So much for the carrot; now for the stick. Trump has set out to impoverish UNRWA, the UN agency that actually does put food on the tables of millions of Palestinians. Will hitting at the Palestinian refugee economic infrastructure further the cause of a solution? Of course the myth of endless Palestinian refugee status, now in its fourth generation, has to be dismantled. But with a hammer? Will this demolish the Palestinian pre-1967 demand for the right of return that implies the State of Israel was “born in sin”? Or will it so alienate Palestinians that it renders any sort of solution, even a short-term palliative, that much more difficult to generate?

Trump’s team is so dedicated to economic solutions that they believe both prosperity and poverty are catalysts for peace.

Q. Were you involved in Oslo?

A. Indirectly. During 1992-93, in parallel with the Oslo talks, I coordinated the Israeli team participating in a secret channel with Palestinian security experts delegated by Arafat to discuss security issues--issues that, incidentally, never came up in the Oslo channel. I knew that PM Rabin placed great stock in our reports. But he refused to brief us regarding his own thoughts on the issues or to give us any sort of mandate.

One consequence was that it was the Oslo negotiators with their close ties to the Foreign Ministry of Shimon Peres and Yossi Beilin who were empowered to negotiate an actual written agreement. Another was that the Israeli security chiefs delegated by Rabin to flesh out an autonomy agreement after September 1993 did not trust either the DOP or Arafat’s Oslo negotiators.

A. Bearing in mind Israel’s political weaknesses and the PLO’s structural weaknesses, Oslo was more or less the best we could do at the time. Mutual recognition and Palestinian autonomy are no mean accomplishments.

But Oslo was flawed from the start. Both Israelis and Palestinians were too slow to realize this. So was the rest of the world: witness John Kerry’s pathetic attempt to make good on the Oslo DOP menu in 2013-2014 and the European Union’s ongoing insistence on paying lip service to an “Oslo” concept of a two-state solution that is not even mentioned in the DOP.

It’s time to move on. That means learning the lessons of Oslo’s failure and applying them to something smarter and more up-to-date. We have to do so before we slide even further down the slippery one-state slope. Sadly the Trump team, egged on by Netanyahu, is making matters worse while the Palestinians appear to have ceased to be players of consequence.