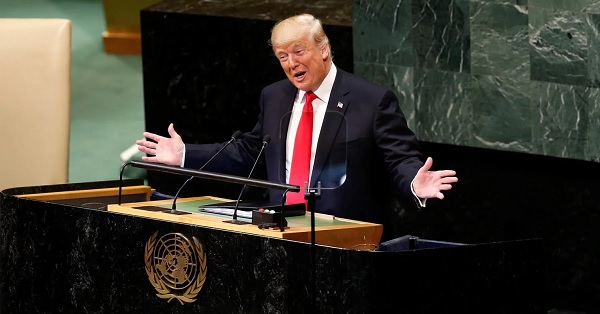 The world laughed at Donald Trump yesterday. In response to his ludicrous assertion that in less than two years his administration “has accomplished more than almost any administration in the history of our country” on the world arena, the assembled diplomatic representatives to the UN General Assembly did not conceal their amusement.

Trump earned the ridicule of the United Nations, in particular regarding his administration’s handling of the Israeli-Palestinian conflict. Rather than advancing peace, the Trump administration has caused more damage than any government in US history.

From the administration’s refusal to officially endorse a two-state solution, to its unilateral recognition of Jerusalem as Israel’s capital and moving of the US embassy, to its attempt to re-define Palestinian refugees and cutting of all non-security-related aid to the Palestinians, the administration’s strategy seems to be nothing more than a move to align US policy with the aims of the Israeli right wing.

Trump’s ridiculous characterization of his highly destructive Jerusalem decision as “principled realism” was as absurd as the inadvertent laugh-line at the start of his speech. This action was anything but principled and it subverted decades of well-reasoned US foreign policy precedent. With his wholesale embrace of Israeli claims to Jerusalem and denial of the reality of Palestinian connection to the city, Trump’s attempt to predetermine a core issue of the Israeli-Palestinian conflict led to a complete breakdown in US-Palestinian relations, at significant cost to prospects for Israeli-Palestinian peace.

The destructive role that Trump and his aides are playing in entrenching the Israeli-Palestinian conflict is no laughing matter. While Trump today expressed his personal preference for a two-state solution to the Israeli-Palestinian conflict in a photo-op with Israeli Prime Minister Benjamin Netanyahu, the actions taken by this administration thus far have systematically undermined this outcome. Until the Trump administration shifts course and backs Trump’s belated conversion to advocacy of a two-state solution with actions that would help bring it about, Americans for Peace Now will continue to call out its destructive policies.

For a blueprint of how President Trump can truly advance a lasting resolution, read APN’s analysis of the necessary elements of any serious peace plan.

Ultimate Deal? APN Position Paper in Advance of the Trump Administration's Israeli-Palestinian Peace Plan
APN's Ori Nir in Haaretz: Trump, if You Really Love Israel - Let Your Peace Plan Go
Hard Questions, Tough Answers (April 24, 2019) - The next Netanyahu government: strategic challenges
APN Outraged by “Merger” of US Embassy and Consulate in Jerusalem, Calls on US Jewish Leadership to Act
Peace Now's Shaqued Morag: "What I told US Ambassador David Friedman"
APN's Debra Shushan and Ori Nir in Haaretz: U.S. Jewish Groups Say They Support a Two-state Solution. So Why Are They So Quiet While Trump Dismantles It?
7 Things You Should Know: Trump’s Decision on Jerusalem