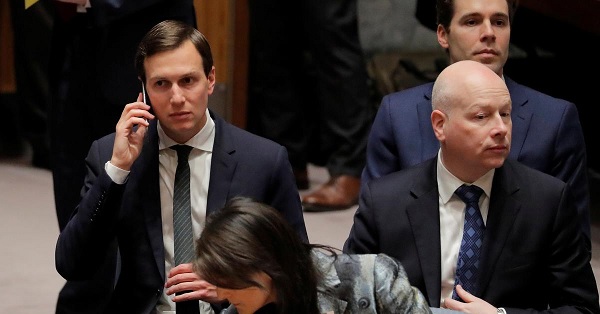 Some have dismissed the plan as an embarrassing, inept exercise in futility. Professors of the Israeli-Palestinian conflict commented that if their students submitted the plan as a term paper, they would barely give it a passing grade. Their assessments are justified. The content and format of the plan are embarrassingly incompetent as is the Trump administration's diplomatic effort to advance it. Not to mention, it takes quite a bit of chutzpah to release a plan that includes photos from successful programs, including schools run by the UNRWA (the UN agency responsible for providing services to Palestinian refugees), for which the Trump administration has slashed US funding.

More importantly the strategy behind the plan is cynical, and its goals are disastrous. The Trump administration is attempting to bury the long-term US policy of pursuing a two-state solution to the Israeli-Palestinian conflict. Members of the trio that has designed this effort -- Jared Kushner, Jason Greenblatt and David Friedman -- have said as much. They have said they don't see a need to remove Israeli West Bank settlements. They don't recognize Israel's occupation of the West Bank and don't demonstrate motivation or intention to end it. As a result, their economic plan does not mention the chief cause for the Palestinian economy's dire situation: the occupation.

This plan does not deserve be taken seriously because it is not harnessed to a political strategy that would end the occupation and establish an independent, sovereign Palestinian state in the West Bank and Gaza Strip. An economic plan that does include the establishment and fortification of national institutions as the foundation of a future state is farcical.

Rather than creating a horizon of hope for Israelis, Palestinians, neighboring countries and stakeholders worldwide, this buffoonish plan does the opposite. It underscores that the Trump administration's Israeli-Palestinian strategy poses a danger to American and Israeli national security interests, to Palestinian national interests, to Israel's Arab neighbors, and to peace.

Americans for Peace Now has called on the Trump administration to shelve its Israeli-Palestinian "peace plan." Now that we have seen the economic portion of the plan, it is even more obvious that the political plan should never see the light of day.