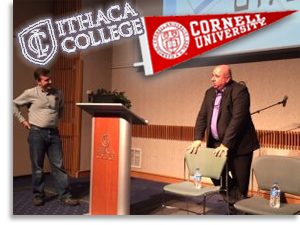 On September 17th, Ori Nir participated in two special events at Cornell University and Ithaca College together with Nizar Farsakh, the chair of the Board of the Museum of the Palestinian People in Washington DC.

Farsakh is the former General Director of the PLO Delegation in Washington DC, and a former adviser to Palestinian President Mahmoud Abbas and to former Palestinian Authority Prime Minister Salam Fayyad.

The talk by an Israeli and a Palestinian was an attempt to make the Israeli-Palestinian conflict more accessible to young people by weaving personal narratives into the collective national narratives of both peoples.

The talk was also aimed at demonstrating that even though the conflict is of a zero-sum nature, its resolution can and should be a win-win, providing each people – Israelis and the Palestinians – with independence, sovereignty, security, dignity and prosperity.

At both campuses, the talk was sponsored by the local Hillel.

An audio recording of the presentations was captured and published as a podcast episode, which is available here. Check out a report in Ithaca College’s campus newspaper.