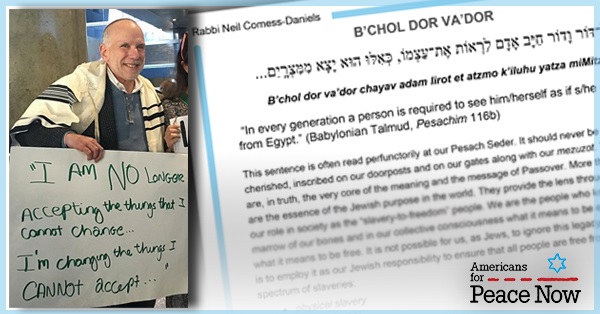 PDF version to view and print 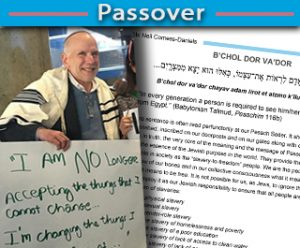 “In every generation a person is required to see him/herself as if s/he came out from Egypt.” (Babylonian Talmud, Pesachim 116b)

This sentence is often read perfunctorily at our Pesach Seder. It should never be – it should be cherished, inscribed on our doorposts and on our gates along with our mezuzot. These words are, in truth, the very core of the meaning and the message of Passover. More than that, they are the essence of the Jewish purpose in the world. They provide the lens through which we see our role in society as the “slavery-to-freedom” people. We are the people who know, in the marrow of our bones and in our collective consciousness what it means to be enslaved – and what it means to be free. It is not possible for us, as Jews, to ignore this legacy. Our only choice is to employ it as our Jewish responsibility to ensure that all people are free from the complete spectrum of slaveries:

There are other messages in these words as well that I learned from my teacher, Cantor William Sharlin, who commented on how the phrases of the text are laid out in a musical setting by David Alster-Yardeini: