Peace Now's Shaqued Morag: We are not distracted!

Do you know the Chassidic story about the rabbi and the goat?

A congregant comes to the rabbi for advice, complaining about the unbearable conditions at his tiny, cramped home. The rambunctious children are fighting. His wife is a hoarder. Everything is stuffy and grim. The Rabbi tells the man to buy a goat and keep it in the house. A week later the poor man comes back incensed. The goat is unbearable. It’s noisy and smelly. It eats everything. Rabbi, help! The rabbi cups his chin and says: well, go ahead and sell the goat. A week later, the man returns happy. Thank you, rabbi, he says, I got rid of the goat and life is wonderful! The house is spacious, the children are quiet, and it even smells good.

I don’t know if Benjamin Netanyahu and Donald Trump intended to use the idea of West Bank de-jure annexation to distract from the ongoing de-facto annexation through settlement construction. What I know is that many were distracted by the annexation goat, both in Israel and in the United States.

Not us. Not Shalom Achshav.

While we are obviously concerned about the possibility of formal annexation, our mission for the past four decades has been to fight the informal, creeping, de-facto annexation of the West Bank. Day in and day out, we witness what it does to the Palestinians, to our democracy, and to the prospects of us reaching a peace agreement with our neighbors. We know how badly it stinks.

Shalom Achshav is the leading organization, bar none, documenting Israel’s West Bank settlement construction and advocating against it. We call out our government for its destructive settlement plans and its occupation practices. We take the government and the settlers to court, often together with Palestinian landowners whose land has been stolen. And we often win. Our meticulously documented data on settlements is sought after by diplomats, journalists, politicians, and scholars. 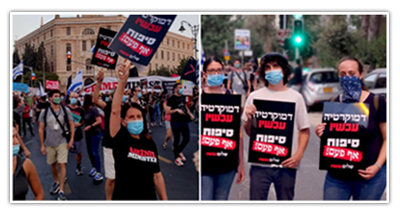 The threat of formal, de-jure unilateral annexation may be off the table for now. But the Israeli government’s annexation-through-settlements doesn’t stop. In fact, it has recently kicked into high gear as Netanyahu’s government plans large settlement projects in two locations around Jerusalem. If they materialize, these new settlements will deny contiguity to a future Palestinian state. We at Shalom Achshav are redoubling our efforts to thwart these plans and not let Netanyahu and his settler allies block the path to future Israeli-Palestinian peace.

Shalom Achshav is the only Israeli peace organization that is fortunate to have a Washington-based US sister organization, which complements what we do here in Israel through education and advocacy in the United States. Americans for Peace Now (APN) collaborates closely with us to combat the ongoing de-facto annexation of the West Bank and to pave the road for future leaders who will have the integrity and decency to give peace a chance.

In addition to its work in Washington and beyond, APN also raises funds in the US to help Shalom Achshav continue our work to keep hope for Israeli-Palestinian peace alive.

We and our partners in Washington can only do it with your help.

Please donate to help us and APN fight all forms of annexation, whether Trump and Netanyahu’s goat returns or not.

$50,000 AIN'T BANANAS
Message of Hope and Commitment, and Supporting APN, from Hagit Ofran, Peace Now Settlement Watch Director
Passover 2020 - Hoping for redemption while praying for a plague to pass
Matching Donation Grant Still Active - "This Is Not A Moment, It's The Movement" - Letter from new APN President and CEO
"Christmas in Bethlehem" - PeaceCast with former mayor Vera Baboun - Intro from Rabbi Shira Stutman
PAST ACTION: SIGN THE LETTER - APN and Shalom Achshav Joint Letter to STOP ANNEXATION
On Tu B'Shavat (New Year of the Trees) - from APN Activist Barbara Green