Listen here to our recent webinar.

Rebuilding Bridges Between Arabs and Jews

with Maisam Jaljuli and Shuli Dichter 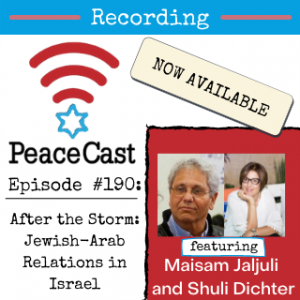 In recent years, while Israeli government policies and Knesset legislation challenged efforts to advance a shared Jewish-Arab society in Israel, Jewish and Arab activists were successfully building genuine bridges between the two publics, based on a sense of shared citizenhood.

Did the recent eruption of inter-communal Jewish-Arab hostilities smash these bridges? Could they be rebuilt? What should be the foundation for an effective Jewish-Arab shared society in Israel? Does the recent crisis open opportunities to establish such a solid foundation?

To answer these and other questions on the state of Jewish-Arab relations in Israel, APN will host a webinar featuring two leading activists in this field, Maisam Jaljuli and Shuli Dichter.

The webinar was held on Thursday, June 3rd

Shalom (Shuli) Dichter is the author of Tensions and Good Intentions, a vision for shared society between Arabs and Jews in Israel. He is the former Executive Director of Hand in Hand, the Centers for Bilingual Education, and the former co-executive director of Sikkuy, The Association for the Advancement of Civic Equality, a Jewish-Arab advocacy organization.

Maisam Jaljuli is the co-chair of the board of directors of Sikkuy and a member of the secretariat of the Jewish Arab organization Standing Together, a Jewish Arab movement that mobilizes people for equality, social justice, and peace. She is active in a broad spectrum of a social, feminist, labor and political causes and a leading member of the political party Hadash