Last month, on September 11th, we sat down to begin drafting this letter to tell you about the vital work of Americans for Peace Now (APN) and the Israeli Peace Now movement.

Christians of the West have long been the unnamed third party to the conflict between Israelis and Palestinians. Most obviously, the ancient Church assumption that Jewish exile from the Jewish homeland was a proof of claims for Jesus still casts its shadow. Similarly, European colonialism, with its Christsanctioned underpinning, spawned what Edward Said called "Orientalism," a permanent factor in Palestinian dispossession from lands on which they resided for centuries. In effect, Jews and Arabs confront one another in a corner, the walls of which neither created.

From where we sit as longtime activists in Israel's struggle to define who she is, this past summer was an astonishing time. What began as a protest over the price of cottage cheese grew into mass demonstrations across Israel against the rising cost of living and our increasingly inadequate social welfare system.

Leonard Nimoy: The Logical Thing to Do

When I was a teenager, I told my dad I wanted to be an actor. In response, he gave me the only piece of advice he ever offered me--"Learn to play the accordion." And he was serious. He said, "You can always make a living with an accordion."

When we at Americans for Peace Now discuss the necessity of the two-state solution for the future of a Jewish and democratic Israel, we typically do so in geopolitical and security terms. We talk about the occupation as a terrible liability that damages Israel's democratic character, its international standing, and, obviously, its ability to live in peace and security with its neighbors.But the impassioned case that we make for peace for Israel stems from our caring about the future of the Jewish national home and its adherence to Jewish values. 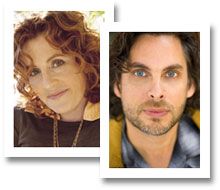 Join Mandy Patinkin in supporting Americans for Peace Now with a tax-deductible donation.

Go HERE to read the recent letter for APN from Mandy and his wife Kathryn Grody. In it, you will find reflections about past visits to Israel and the West Bank, and a compelling account of why they are so committed and passionate about supporting Americans for Peace Now.