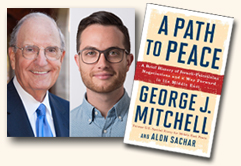 Senator George Mitchell has had a long and distinguished career. He served for several years as Chairman of DLA Piper, now Chairman Emeritus. Before that he served as a federal judge; as Majority Leader of the United States Senate; as Chairman of peace negotiations in Northern Ireland which resulted in an agreement that ended an historic conflict; and most recently as U.S. Special Envoy to the Middle East. In 2008 Time Magazine described him as one of the 100 most influential people in the world. Senator Mitchell is the author of five books. His most recent books are a memoir entitled The Negotiator: Reflections on an American Life, published in May 2015 and A Path To Peace, published in November 2016.

Alon Sachar has worked to advance Middle East peace under two U.S. administrations. He served as an advisor to the U.S. Ambassador to Israel, Daniel B. Shapiro, in Tel Aviv from 2011 to 2012 and to President Obama’s Special Envoys for Middle East Peace, George J. Mitchell and David Hale, from 2009 to 2011. In those capacities, Alon participated in negotiations with Israelis, Palestinians, and Arab States. From 2006 to 2009, he served in the State Department’s Bureau of Near Eastern Affairs, focusing on the U.S. bilateral relationships with Israel and the Palestinians as well as Arab-Israeli relations. Alon has also worked out of the U.S. Consulate in Jerusalem, which serves as the U.S. diplomatic mission to the Palestinians. Today, Alon works as a lawyer in California, where he was born and raised.