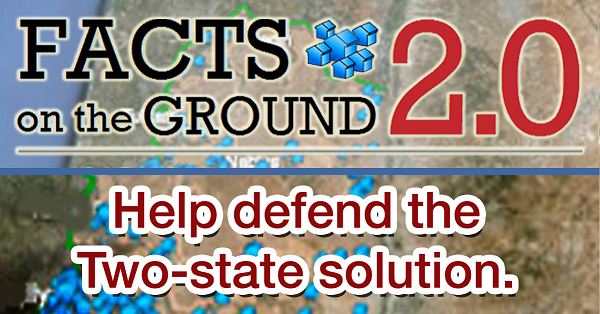 Earlier this week, a private lawyer hired by the most right-wing government in Israel's history defended the new "Expropriation Law" before Israel's High Court of Justice. His defense of the law – which allows for the legalization of hundreds of illegal West Bank settlement outposts built in part on privately-owned Palestinian land – was that it would actually benefit the Palestinians.

Yes, you read that correctly. No wonder that the government’s Attorney General refused to defend the law before the Court.

Meanwhile, it's become clear that the Trump administration is doing little to restrain settlement expansion in the West Bank. This inaction has left a void for Netanyahu and his right-wing supporters to do as they please, no matter the damage to prospects for Israeli-Palestinian peace.

With our soon-to-be-launched mobile app, Facts on the Ground 2.0, Americans for Peace Now is stepping into that void.

See the infographic below to learn about Facts on the Ground 2.0, how it works, and how you can help support the fight to curb West Bank settlement expansion and preserve the two-state solution for Israelis and Palestinians.

The Trump administration won't have any more excuses
There will be no "restraint"
A high-level briefing, one click away
Support APN's new settlements app and help "win the peace"
More relevant than ever
NOW AVAILABLE: APN's groundbreaking settlements map app
$6,000 gets us to our goal. Download and support this app!