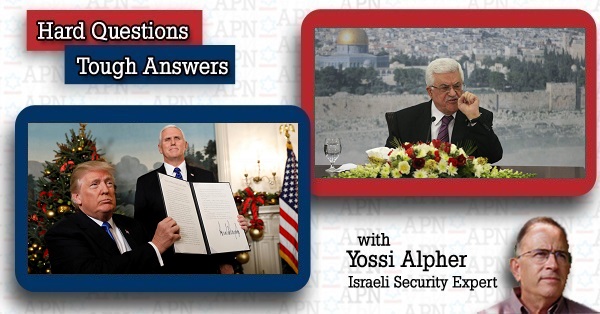 This week, Alpher discusses important lessons from Trump’s December 6 declaration on Jerusalem; how the administration's recent statement - “We cannot envision any situation under which the Western Wall would not be part of Israel” - made the situation worse; if we're looking at a new intifada; examples from the recent past wherein far more sophisticated attempts at fostering peace ended up doing more damage than good; and other empty slogans related to the peace process.

Q. Are there important lessons from Trump’s December 6 declaration on Jerusalem that you didn’t already cover in last week’s Q & A column?

A. Yes. It is now fair to assess that Trump and his Middle East peace team ignored a very obvious lesson from previous attempts by the US to get involved in Israeli-Palestinian peace: do no harm. In other words, recognize in advance that the failure of another attempt to move the process forward is almost certain to move it backward. Therefore, if you don’t have a good chance of success, better not to try.

Trump recognized Jerusalem as Israel’s capital for a number of reasons. He wanted to fulfill a campaign pledge. And he wanted to rally his base, which is pro-Israel, at a time when it was shrinking due to other factors. I have suggested that, conceivably, he wanted to preempt his peace team of Kushner and Greenblatt with a pro-Israel gesture because he and they assessed that their peace proposals would in any case be rejected.

But he presumably did not seek to make things substantially worse for Israelis and Palestinians. Indeed, the impending trip to the region by Vice-President Pence, with its scheduled visit to Bethlehem and now-cancelled meeting with Palestinian leader Mahmoud Abbas, was supposed to cement the achievement of the Dec. 6 declaration in breaking new ground toward a two-state solution based on new parameters.

Instead, it generated yet another administration declaration--“We cannot envision any situation under which the Western Wall would not be part of Israel”--that made the situation demonstrably worse.

Q. Worse in what way?

A. At the regional strategic level, a variety of Palestinian, Arab and Muslim high-level emergency meetings held over the past week or so have effectively declared the United States unacceptable as a peace facilitator. This is bad for Israel. While the Europeans and Russians may now step forward to facilitate, they are almost certainly less capable than the US at providing powerful international cover for a peace process, and definitely less capable at offering Israel the security guarantees it needs as part of a peace package.

A possible European initiative to recognize two capitals, Israeli and Palestinian, in Jerusalem is by the same token not likely to move the process anywhere; Russia already tried this tack a few months ago, with zero impact. Nor will Turkish President Erdogan’s search for new and original ways to seize a regional anti-Israel leadership role help: how he intends to set up a Turkish embassy to the state of Palestine in East Jerusalem remains a riddle.

Then there is Jordanian King Abdullah II’s anger with the Trump administration regarding a declaration on Jerusalem that can be understood as undermining the Hashemite Kingdom’s internationally and regionally recognized role as custodian of Jerusalem’s Muslim holy sites. All these protests are thus far proving about as effective as a pending United Nations decision calling to “withdraw” Trump’s recognition of Jerusalem.

Q. And at the regional tactical level? Are we looking at a new intifada?

A. There are indications that the Fateh movement--the mainstay of the Palestinian Liberation Organization, Israel’s official peace partner--is considering withdrawing from the Oslo process and returning to armed resistance. Mahmoud al-Alul, the number 2 leader of Fateh, made a statement to this effect a few days ago, thereby also signaling growing Fateh agreement with Hamas’s violent line and growing awareness of where the Palestinian “street” is moving.

Unrest and violent protests continue. Angry demonstrations are ongoing in Gaza, the West Bank and Jordan. Taken together with the constant nightly dribble of rocket fire from the Gaza Strip and the Palestinian “divorce” from collaboration with the US, this may signal the slow collapse of the deterrence that the IDF established in the summer 2014 war with Hamas in Gaza. Here and there, Hamas is still trying to prevent rocket fire by its more extreme Salafi partner organizations in the Strip, particularly Islamic Jihad. But this effort may not last long.

Yet Hamas’s options are limited. Israel’s success at “intercepting” attack tunnels from Gaza confronts Hamas with the need to either attack Israel now, before it completes its revolutionary anti-tunnel defense system, or develop new means of attacking by air and sea. Israel’s Shin Bet security force has also in recent months carried out large-scale arrests of Hamas activists in the West Bank, and thwarted dozens of potential attacks there.

It is entirely possible that Palestinian threats of violence are empty and that no new intifada will emerge from all this. In that case the damage will be primarily to America’s international position. Washington will be no more able under Trump to sponsor Middle East peace than it is to advance a rational climate policy, keep Russia out of the Middle East or prevent North Korea from threatening it with nuclear war.

A. Of course Jerusalem is Israel’s capital. And undoubtedly the Kotel, or Western Wall, will remain Israeli territory in any final status agreement. And of course Israelis are delighted to hear these statements. But when Washington, not Jerusalem, states these as fact, in Palestinian, Arab and Muslim eyes this constitutes dangerous preemption of a negotiated peace process, for several reasons.

First, these are final status issues to be negotiated and settled between Israelis and Palestinians, not by the United States. And second, Jerusalem and the Kotel are issues of religious significance to the Muslim world and the US is preempting their status.

Lest we forget, Jerusalem is the third holiest city in Islam. And the Western Wall is where the Prophet Mohammed is believed to have ascended to heaven on his horse al-Buraq, there to receive enlightenment, after the horse brought him there from Mecca.

Conceivably, the religious aspects of the Jerusalem issue are so sensitive that Israelis and Palestinians are incapable of reaching agreement on them at present and they are best left in their current status quo. Some reports indicate that the Kushner-Greenblatt team intends, or perhaps intended until recently, to make just such a proposal early in 2018 and to suggest that the two sides concentrate on the “real estate” of the rest of Israel and Palestine.

That is not a bad idea. I have floated that idea myself in the past. But it would have to include hard guarantees that after a Palestinian state is established, it and Israel would return to negotiate the issue on a more egalitarian basis and that meanwhile the status quo would prevail.

So even if this is the case, why does Trump proceed to issue statements that, in Arab eyes, change that very same status quo in Jerusalem, thereby precluding both final status talks and international guarantees.

This administration’s exercise in ham-fisted amateurism in the Middle East might be more forgivable if there were not obvious examples from the recent past wherein far more sophisticated attempts at fostering peace ended up doing more damage than good.

A. The Camp David negotiations of July 2000, which failed, deteriorated by late September of that year into the second intifada. Secretary of State John Kerry’s 2013-2014 attempt to foster a final-status process, which he abandoned in the spring of 2014, ended up in that summer’s war with Gaza. The chain of cause and effect may not in all cases be easy to follow, but the fact that major violence erupted a few months after failure is undeniable.

Whether Trump’s initiatives of recent weeks eventuate in major violence is not certain. They have already produced widespread minor violence. Worse, they have for the first time that I can recall positioned the US as a rejected facilitator.

At this juncture, Vice President Pence is not welcome in Palestine or even in Egypt.

Q. While we are slaughtering sacred cows in holiday season, are there any other empty slogans related to the peace process that should be singled out?

A. I can think of two. The first is “economic peace”, a favorite of the Trump team and of PM Netanyahu. Briefly, this slogan is empty because the conflict is not an economic conflict; it is religious, historical and political. Attempts to improve the atmosphere for peace negotiations by proffering economic largess on the Palestinians have never worked. Both intifadas broke out at times of relative Palestinian prosperity.

By all means, help the Palestinians economically. Of course they should live better, particularly in the Gaza Strip. But don’t pretend this fosters peace.

The second empty slogan--under current circumstances--is the very use of the term “peace process” in the present tense. European Union spokespersons and diplomats are particularly prone to talking about a peace process as if it actually exists. But it doesn’t, not now.

The sooner all parties concerned acknowledge this fact, the sooner they might come up with innovative ideas for moving Israeli-Palestinian relations to a better place.

Meanwhile, the absence of a peace process, to which Trump has now contributed, serves two kinds of regional actors. In Israel it serves the Netanyahu government and the right-religious mainstream which covets the land more than peace. And in the Middle East at large it serves the Islamists--Sunni (from Hamas to ISIS) as well as Shiite (Iran, Hezbollah)--who call for Israel’s destruction and recognize that a genuine Israeli-Palestinian peace process would thwart that aspiration.

True, there are those in the US and Israel who argue that by “creating facts” in Israel’s favor regarding final status issues, Trump is signaling the Palestinians that time is not in their favor. According to this logic, the PLO will soon recognize that it has no choice but to swallow its pride and come to the table with now-inferior cards to play.

This concept assumes the Palestinians ultimately need peace at any price. It is mistaken. They can and will hold out for their core demands for a long time to come.