Friedman Lights Menorah at the Western Wall and Whitewashes the Occupation 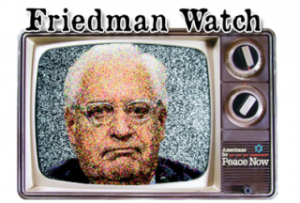 One week after Donald Trump’s announcement on Jerusalem – which triggered unrest in Israel, the Occupied Territories, and the broader Middle East – Ambassador David Friedman was stoking the flames. At a menorah lighting at the Western Wall, Friedman kvelled in Hebrew, “It is a huge honor for me and I am extremely excited to be standing here at this holy site and to light the second Chanukah candle in Jerusalem, the holy city and the capital of the State of Israel.”

Friedman’s emotional visit to the Western Wall, in his official capacity as US ambassador, added a religious dimension to Trump’s decision to recognize Jerusalem as Israel’s capital. It also provided reason to think that the United States government was for the first time accepting Israeli sovereignty in part of East Jerusalem, which Israel conquered in 1967 and Palestinians desire as their capital in a negotiated peace deal with Israel. 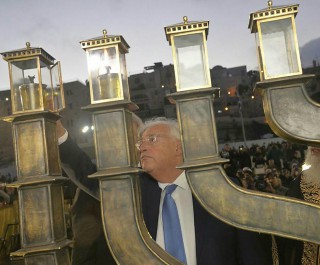 A senior administration official underlined this point shortly after Friedman’s visit, stating: “We cannot envision any situation under which the Western Wall would not be part of Israel. But as the president said, the specific boundaries of sovereignty of Israel are going to be part of the final status agreement.”

Friedman has been identified as a key influence on Trump’s decision to relocate the US embassy in Jerusalem having “committed to do all I can to advocate for this move.”

What other major changes to US policy is Ambassador Friedman pushing behind the scenes? Reports have emerged that Friedman is pressuring the State Department to ban use of the word “occupation” in reference to the West Bank, including in its annual human rights reports. The State Department apparently rebuffed Friedman’s intervention but is facing pressure “from above” to continue discussion with Friedman on the issue. Ambassador Friedman has previously claimed, erroneously, that Israel is only occupying two percent of the West Bank and opined that the settlements are part of Israel.

NEW ITEM - Goal: Lower the expectations of the Palestinians - The Friedman File: APN Watch on soon-to-be-ex-US Ambassador to Israel
7 Things You Should Know: Trump’s Decision on Jerusalem
APN's Debra Shushan in Haaretz: The Israeli 'Left' Is Gaslighting U.S. Jews Into Support for Trump on Jerusalem
December 19, 2016 - US-Israel in the Trump era: Ambassador Friedman and a US embassy in Jerusalem
U.S. (non)-Recognition of Sovereignty in Jerusalem: A Consistent Policy, pre-1948 - Present
Pence's Israel Visit Panders to Evangelicals; Further Damages US Role as Peace Broker
From Creeping to Leaping: Annexation in the Trump-Netanyahu Era (updated October 2019)