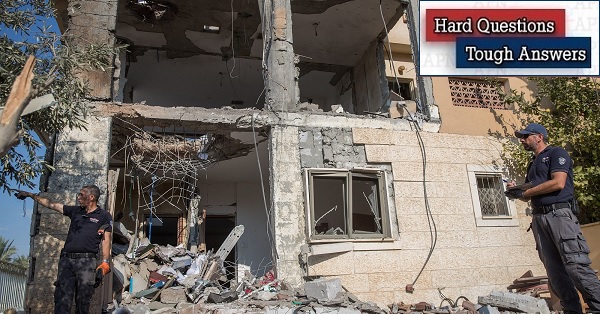 Q. Last week, after a rocket from Gaza destroyed a home in Beersheva, Israel almost launched another war against Hamas. What stayed the Netanyahu government’s hand?

A.War was not launched because no one was hurt in the destroyed home. Pure and simple. A single mother living in the home was awakened by the alarm siren at 3 a.m. In less than a minute she gathered her three children and herded them to a basement shelter, seconds before the rocket destroyed her home. Her next-door neighbors slept through the alarm but luckily their house was barely touched by the incoming Hamas rocket.

Because no one was hurt in Beersheva, the government decided in favor of a restrained retaliation coupled with a renewed ceasefire effort--spurred on by the Beersheva near-miss--by Egypt and United Nations troubleshooter Nikolai Mladenov. The latter voiced his sense of urgency when he opined that “Gaza is imploding. This is not hyperbole. This is not alarmism. It is a reality.” The IDF transported tanks south toward Gaza in broad daylight as an overt warning that war could be imminent.

Ultimately, last Friday’s Gaza fence demonstrations were curtailed by Hamas, which allowed that it had not authorized the rocket launch against Beersheva. Things quieted down. This week, limited commerce between Israel and Gaza was renewed.

But had Israeli children been killed by a rocket fired at a major Israeli city we would almost certainly now be deep into another war.

A. A series of Israeli governments has quite consistently responded to Hamas violence in the following ostensibly measured way: the more Israeli civilians are killed or injured and the more the range of Hamas rocket firings includes cities as opposed to development towns and border kibbutzim, the more likely Israel’s response will escalate into full-fledged attack on Hamas in Gaza. In other words, if the material damage and cost in human lives can be restricted geographically to relatively sparsely populated parts of southern Israel, a war--with its inevitable greater cost in human lives and its political risk for the government--will be avoided. This is clearly a political-demographic calculation: there are not enough votes on the Gaza periphery to easily justify war, but there are in Ashkelon and Beersheva.

Last week a brave and resourceful mother in Beersheva kept Israel out of war and generated yet another effort to calm things down in and around Gaza.

Q. You mentioned political risk for the government. Where did politics enter into the picture last week?

A. Before becoming defense minister more than two years ago, Avigdor Liberman used to brag arrogantly that if he had the job he would erase the Hamas leadership within 48 hours and erase Hamas as well. Once he got the job--without any background at all in security issues--and brought his small Yisrael Beteinu party into Netanyahu’s coalition, he learned to listen to IDF generals who consistently warn of the cost and counterproductive nature of any new war with Hamas in Gaza.

But now Knesset elections are nearing. Liberman has discovered that his tenure in the Defense Ministry has not improved his electoral fortunes. Indeed, a law he pushed through prior to Israel’s previous elections in 2015, requiring a minimum of four electoral mandates for a party to enter the Knesset, now threatens to wipe out his own party. That law, incidentally, was intended by the racist Liberman to reduce Israeli Arabs’ representation by eliminating their small parties; it ended up causing all Arab parties to unite and score resoundingly in 2015.

Whereas smarter politicians like Netanyahu are justifiably wary that a new war could go seriously wrong and hurt them electorally, Liberman apparently feels he has nothing to lose and everything to gain by making good on his former boasts and riding into elections as a victorious defense minister. Last week he found himself, with the help of that Beersheva mother, in a minority in government deliberations, with the IDF advising against a heavy response and Netanyahu concurring.

Until next time around.

Q. Exactly. Doesn’t all this boil down to the Netanyahu government having no viable strategy for Gaza? Everything depends on that Beersheva mother at 3 a.m.?

A. Hamas, like Hezbollah, is a non-state actor motivated by militant Islamist rejection of Israel’s right to exist and prepared to absorb huge losses. That makes it difficult for Israel to achieve either deterrence or decisive victory in a war with Hamas. Accordingly, Israeli governments have failed to find a viable strategy for dealing with the Palestinian Islamist movement. Currently, Egypt’s concerns and the refusal of the PLO in Ramallah to cooperate in any sort of Gaza solution make matters worse. On the other hand, the relative harmony Israel enjoys with the Sunni Arab states means that Israel can afford to contemplate war with Gaza without risking regional escalation.

Finally, with elections approaching, no one in Jerusalem is looking to make the kind of tough decisions implied by molding a “strategy” for Hamas. Recognize a separate Gazan state? Reoccupy Gaza, whatever the price? Open the borders and encourage Qatar and Turkey, both Hamas sympathizers, to build Gaza infrastructure despite the risk that Hamas will militarize new ports and smuggle in more sophisticated arms? Not at election time, thank you.

A. Lucy Aharish is an Israeli Arab woman, a Muslim, who broadcasts in Arabic, Hebrew and English on Israeli television. She is an outspoken Israeli patriot and a Zionist, a rarity among Palestinian Muslims, hence appreciated especially by the Israeli right wing. Her husband, a Jew, stars in the international TV hit Fauda.

The only Arab-Jewish marriages Israelis are familiar with are between Arab men and Jewish women, usually women from the lower socio-economic strata, and even these generate massive efforts by religious and right-wing circles to dissuade the bride. But a Jewish celebrity man and an Arab Muslim celebrity woman? And after revealing they had quietly been living together for four years already?

The reactions from Israel’s “patriotic” right were ugly. The Likud’s MK Oren Hazan accused Aharish of seducing Halevi and bemoaned, “Lucy, it’s not personal, but you should know Tzachi is my brother and the Jewish people are my people, stop the assimilation!” Interior Minister Aryeh Deri of the ultra-Orthodox Shas party added, “They're a couple in love and getting married, but this isn't the right thing. You'll have children, they'll have a problem in Israel because of their status. If she [Aharish] desires Judaism, then there's the process of conversion." The Jewish Home party posted an election poster in Ramla, a city with a mixed Jewish-Arab population, showing a photo of a young Muslim woman in traditional dress and warning Jewish voters, “Tomorrow this could be your daughter”.

Even secular centrist Yair Lapid, leader of Yesh Atid, first sent his blessings to the couple but then, realizing he was jeopardizing the middle-of-the-road “traditional” Jewish sector he is trying to woo, stated that their decision to wed hurts the Jewish people demographically: “We’re trying to grow” while you two are in the way.

Q. So the Israeli right is racist. Nothing new here.

A. Worse. This is the same right that seeks to gobble up East Jerusalem and West Bank territories that hold some three million Palestinian Arabs and promises to advance their economic situation. It is the same political right that prides itself on improving the educational and societal standing of the Israeli Arab population of nearly two million. Monday’s media, for example, proudly featured the accomplishments of the first Arab woman in Israel to achieve a PhD in computer science and the first Bedouin woman to join the elite Israel Police emergency rescue team. Naftali Bennet, the education minister who heads the far-right Jewish Home party that posted the racist Ramla poster, takes great pride in his ministry’s accomplishments in the Arab sector.

What is Israel’s dominant right thinking when, with great determination and fan-fair, it turns Israel into a mixed Jewish-Arab society living in a single political entity? That Jews and Arabs won’t mix? Won’t intermarry and produce Jewish-Muslim children? That all the Arabs involved will convert to Judaism, a near impossible procedure in a Jewish sector dominated by extremist ultra-Orthodox demands that deter even Russian immigrants? With the exception of a (still) small openly racist fringe, Israel’s dominant ultra-nationalist mainstream generally likes to present itself as enlightened and egalitarian with regard to Palestinian Arabs in Israel and the West Bank. The term “apartheid” is abhorrent to the Israeli right even as that word describes with growing accuracy what is happening in the West Bank.

Well-educated Israeli Arab men and women are moving resolutely and confidently into the high-tech, medical and other sophisticated sectors of the economy. East Jerusalem and West Bank Palestinians are increasingly aware that the future lies in a single multi-ethnic political entity rather than in a separate, viable Palestinian state. Under these conditions, we will see more and more intermarriage.

And we’ll witness more and more astonished right-wing hardliners, a few inevitably mouthing racist hate-talk reminiscent of Nazis, wondering how in the world this happened? Their only compensation will be to listen to the Arab Muslim religious mainstream in Israel. It also by and large condemns Lucy Aharish and Tzahi Halevi for daring to take seriously Muslim Arab integration into Israeli society--whether that happens by choice or due to lack of a choice.