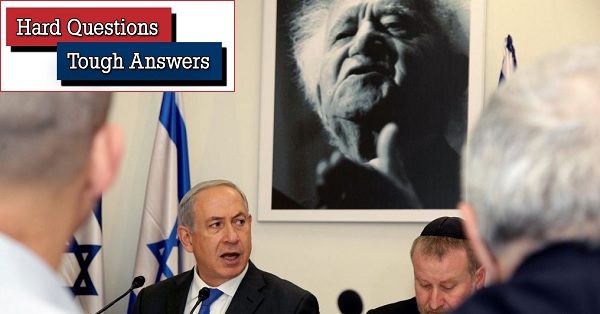 Q. This coming Saturday, July 20, Binyamin Netanyahu will have served as prime minister of Israel longer than David Ben Gurion: 13 years and 128 days, to be exact. Can you compare the two?

A. Frankly, no comparison really works here. Ben Gurion renewed Jewish sovereignty for the first time in nearly 2000 years. He made incredibly daring and difficult decisions in order to bring this about: the very declaration of Israeli independence against all the odds; Altalena and the determined creation of a single sovereign armed force; prioritizing mass Aliyah over the military’s budget; accepting German reparations; creating a nuclear project. Nothing that came after can compare.

Netanyahu’s longevity in office contrasts particularly with Ben Gurion precisely because Netanyahu has consciously avoided making hard decisions while seemingly letting time and circumstances take care of the challenges involved. Ben Gurion would have acted--confronted the settlers, for example, whatever the cost--to prevent Israel from becoming a binational entity. By the same token, Ben Gurion might have adopted a far more aggressive military pose vis-à-vis Iran in Syria--not necessarily the wisest move.

At the socio-economic level Ben Gurion, who successfully imposed upon beleaguered and bankrupt Israel the absorption of hundreds of thousands of Eastern Jews and Holocaust survivors by a state-run, centralized economy, would never have acquiesced in the huge income gaps and social fragmentation that have emerged in Israel’s otherwise successful market economy under Netanyahu.

Netanyahu is essentially a status quo politician, more like Yitzhak Shamir than any other predecessor. Menachem Begin pro-actively sought peace with Egypt, Yitzhak Rabin with the Palestinians and Jordan. Ariel Sharon withdrew from the Gaza Strip. In all cases, these leaders consciously challenged a skeptical public and a hostile political reality. They behaved in the Ben Gurion mode. Bibi meets secretly with Arab leaders and openly with Putin and Xi, but only with the goal of maintaining Israel’s physical security while doing nothing about the existential Palestinian demographic threat closer to home. Bibi also has Trump--a problematic asset but nonetheless a luxury Ben Gurion never dreamed of enjoying as he navigated the fortunes of a truly isolated country.

Incidentally, Ben Gurion also confronted corruption allegations--spending government and Histadrut money for his book collection and even his Tel Aviv home. He ignored or rebuffed the charges easily. One thing that has changed for the better since then is the rule of law, though that too is now being challenged by Netanyahu.

Netanyahu is as distant from Ben Gurion as any Israeli prime minister. Only his impressive political skills place him in the Ben Gurion class. Yet Netanyahu uses those skills basically to stay in office--currently, as a means of avoiding prosecution on corruption charges. Ben Gurion applied his political skills toward realizing his daring vision for Israel. When necessary, he left office precisely to advance his goals. Can anyone imagine Netanyahu doing this?

Q. Turning to the current elections, is Ehud Barak making progress toward uniting the Zionist left? Is the religious ultra-nationalist right uniting? Indeed, is anything happening?

A. Barak currently appears to be the only politician exuding enthusiasm and activism concerning these elections. And he is in trouble on a number of fronts.

For one, Amir Peretz won the Labor leadership primary election and he is no great fan of Barak. The two have met, and Barak ritually announced that he would accept the number two slot on a united list if that’s what the polls indicate. But Peretz, whose strengths lie in the socio-economic sphere, appears to believe that Labor is better off uniting with Meretz under newly-elected leader Nitzan Horowitz and with “lite” social-rights rightists like Orly Levy-Abakasis. Peretz also wants to attract economically disenfranchised voters from the political right where Barak is a liability.

Meretz, the only Zionist party that succeeds in attracting substantial Arab votes, fears that it will lose them if it joins a list with Barak. The latter, we recall, was prime minister in October 2000 when 13 Arab citizens of Israel were killed by the Israel Police during violent demonstrations supporting the outbreak of the Second Intifada. Many Israeli Arabs have never forgiven Barak.

Concern for socio-economic issues and Israeli Arab citizens is hardly the image of the multi-millionaire Barak. His business ties with convicted and now re-accused sex offender Jeffrey Epstein could not have been revealed at a worse moment politically from his standpoint. Indeed, Barak has trouble even explaining why the Wexler Foundation, with or without its ties to Epstein, awarded him two million dollars for “research”, the nature of which Barak mysteriously refuses to explain to potential voters.

Barak has now founded the “Israel Democratic Party”. On Sunday this week he broadcast a rather astounding laundry list of political goals by way of a platform. He is promising a written constitution within two years, public transportation on the sabbath, civil marriage, final borders that provide “security and a solid Jewish majority for generations”, free compulsory education from birth, and an end to hospital delays and crowding.

Barak’s problem seems to be that he is the only one who takes himself seriously. Polls place his party barely over the mandate threshold. Further to the left, the two Arab lists have thus far been unsuccessful at reuniting into a single list. All this means that as matters now stand, the left is again in danger of losing votes to the mandate threshold because of fragmentation among its ranks.

Q. And the right? Is it uniting?

A. No. It is squabbling and embarrassing the Likud.

For one, two right-religious extremist politicians promoted by Netanyahu in his current interim government in an effort to encourage unity have made recent statements that so antagonized secular rightists that Netanyahu himself was forced to condemn them. Transportation Minister Bezalel Smotrich entered his new office by calling for Halacha (traditional Jewish religious law) as the basis of all laws in Israel. Smotrich went on to support his colleague, Education Minister Rafi Peretz, after the latter advocated an apartheid state, endorsed forced gender “conversion” for gays, and labeled the situation of US Jewry a “second Holocaust”.

Adding to the damage, the extreme religious ultra-nationalist right is again fragmented, with Itamar Ben-Gvir’s fascist “Jewish Power” holding out for a bigger share of the spoils if it is to rejoin Peretz’s Jewish Home and Smotrich’s Tkuma parties in a united far-right list.

Netanyahu is concerned not only with conciliating a fragmented messianic religious far right. He is also worried about Avigdor Liberman poaching secular votes away from the Likud. Liberman, we recall, helped catalyze Israel’s September 17 Knesset elections by refusing to compromise with the powerful Haredi (ultra-Orthodox) Knesset faction during coalition talks over conscription of Yeshiva students. Now Netanyahu is helping arrange financing for an alternative, Likud-oriented right-secular list set up by the mayor of Tiberias, Ron Kobi, who has his own turf wars with the Haredim. Netanyahu is also trying to poach veteran Russian immigrant voters from Liberman, whose Yisrael Beteinu party originally emerged as Liberman’s vehicle for organizing them politically.

Q. Where is Blue-White?

A. Blue-White is seemingly suffering from the same summer doldrums that are plaguing all the politicians except the hyper-active Ehud Barak. Amazingly, given Blue-White’s lack of activism, it is still holding up in the polls, more or less on a 30-mandate par with the Likud. Equally amazingly, having failed once to form a government, Blue-White is still holding together as a united list.

A. Naftali Bennet and Ayelet Shaked, whose New Right party failed last time to meet the mandate threshold, are still searching for roles on the Israeli political right. Tzipi Livni is mentioned here and there as a possible partner for Labor and/or Barak. We have already mentioned Orly Levi-Abakasis. Each on her/his own is considered worth a mandate or two, maybe three. As of now, with an August 1 closing date for submitting party lists looming, they remain in the political wilderness.

A. Two weeks before party lists have to be finalized, the bottom line is fragmentation and what is so far a sleepy campaign. Ehud Barak, who threatened to at least breathe new life into Israel’s politics, has flopped so far, with his past--both the more distant and the more recent--haunting him. A steady stream of leaked revelations about Netanyahu’s alleged corruption crimes does not seem to budge the prime minister’s devoted followers even when Smotrich and Peretz give voters a taste of the future in another Netanyahu-led coalition.

One of these days, Blue-White will presumably start campaigning. In potentially critical developments for an otherwise tight race, the left and the right will or will not unite. Lest we forget, August is by now the traditional time for a mini-war with Hamas in Gaza: rocket fire on central Israel could also become a decisive factor.

Finally, we return to the inevitable Netanyahu-Ben Gurion comparison on July 20. Ben Gurion’s legacy is the phenomenal success of Zionism, one of the twentieth century’s formative narratives and a major existential turning point in the fortunes of the Jewish people. What will Netanyahu’s legacy be?