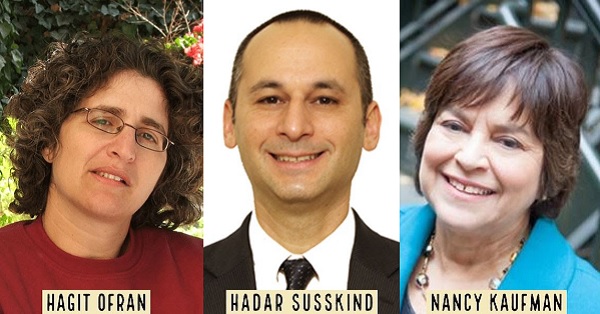 This online discussion can be accessed via your computer or by phone.

Online elections for the 2020 World Zionist Congress are underway – and the results will be crucial, impacting the distribution of $5,000,000,000 in budget money over the next five years and affecting every area of Jewish life worldwide and every aspect of life in Israel – including the funding of West Bank settlements.

Joining us on Wednesday, 29 January, 12:30-1:30pm Eastern Time to discuss the World Zionist Congress elections and their importance both “here” and “there” will be two superb panelists, one American and one Israeli:

Nancy Kaufman, past CEO of the National Council of Jewish Women and a member of the HATIKVAH: Progressive Israel Slate

Hagit Ofran, Co-Director of the Settlement Watch project of the Israeli Peace Now movement (Shalom Achshav)
The conversation will be introduced and moderated by Hadar Susskind, Campaign Director for the HATIKVAH: Progressive Israel slate. This event is co-sponsored by Americans for Peace Now and National Council of Jewish Women. A Q&A will be included.

Please tune in for this important webinar!


Hagit Ofran is the Co-Director of Peace Now's Settlement Watch project and has two decades of expertise on issues related to the settlements in the West Bank and in East Jerusalem. Hagit is responsible for the research elements of the project and devises the project’s legal strategy. Widely recognized as Israel’s foremost expert on a full range of issues related to West Bank settlements and settlement-related developments in East Jerusalem, Hagit’s work includes traveling daily throughout the West Bank and examining aerial photos and official Israeli documents. She is one of “66 Israeli women you should know” of Haaretz daily: “women breaking barriers, defying stereotypes and wielding influence”. She formerly worked for The Geneva Initiative and was Yossi Beilin’s personal assistant when he was Minister of Justice. She lives in Jerusalem and received her B.A. in Jewish History from Hebrew University.

Nancy K. Kaufman has had a distinguished career as a public servant, advocate, and non-profit leader. From 2011-2109, Kaufman served as CEO of National Council of Jewish Women (NCJW) where she reenergized this 125-year-old legacy organization of volunteers and advocates that turn progressive ideals into action. NCJW advances social and economic justice for women, children and families and safeguards individual rights and freedoms in both the United States and Israel.

Prior to joining NCJW, Kaufman served as the Executive Director of the Jewish Community Relations Council (JCRC) of Boston for twenty years, where she led the social justice, Israel advocacy, and governmental affairs agendas for Boston’s Jewish Federation and its agencies. She has also held a variety of positions related to health and human services delivery in state and local government and in the nonprofit sector. She is a member of the HATIKVAH: Progressive Israel Slate, currently running in the World Zionist Congress elections.

Hadar Susskind is Campaign Director of the 2020 HATIKVAH: Progressive Israel slate. He has held senior positions in a number of progressive advocacy organizations, including J Street, Bend the ARC, the Tides Foundation, the Jewish Council for Public Affairs, the Council on Foundations, and others. He served as a Sergeant First Class in the Givati Brigade of the Israel Defense Forces, and "grew up at" Habonim Dror Camp Moshava.