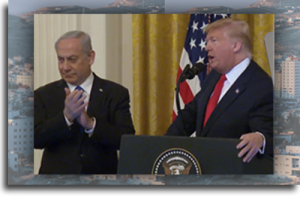 The Trump Administration - "Peace to Prosperity: A Vision to Improve the Lives of the Palestinian and Israeli People"

In addition to the items below, APN's daily News Nosh provides a summary of the news from Israel both online and as an easily digestible summary email. Read and Subscribe

Peace Now: The Trump Plan – A Plan for Annexation, Not for Peace

Peace Now: "Data on Annexation and Populated Land Swaps under the Trump Plan"